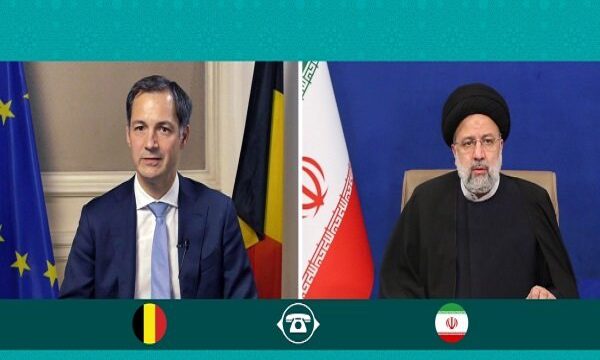 He made the remarks in response to a telephone conversation with Belgian Prime Minister Alexander De Croo on Wednesday evening during which he said that Tehran welcomes efforts to strengthen its relations with Brussels.

The two countries have developed their diplomatic relations based on the principles of mutual respect and mutual benefit, Raisi said, adding that the Islamic Republic of Iran welcomes efforts to strengthen and expand relations between Tehran and Brussels.

Referring to the longstanding and positive trend of relations between the two countries and describing these relations as important for Belgium, the Belgian Prime Minister Alexander De Croo, for his part, expressed hope that the trend of expanding relations and interactions with the Islamic Republic would go ahead in a favorable way through the efforts of the two countries officials.

The Belgian Prime Minister said, “We seek to strengthen bilateral relations with Iran, especially in the economic and consular fields.”