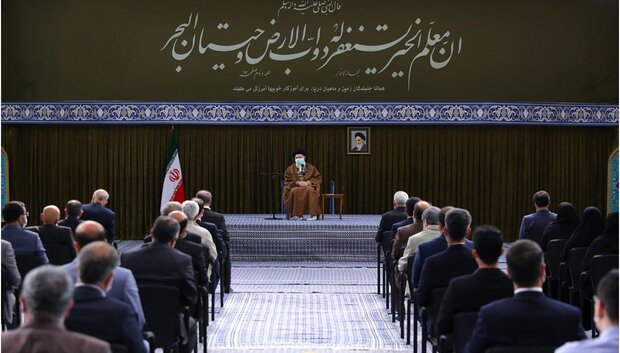 Iranian-Islamic identity must be institutionalized

The Leader of the Islamic Revolution Ayatollah Seyed Ali Khamenei received a group of teachers and Education Ministry officials today in Tehran in Husseiniyeh of Imam Khomeini.

Hailing that Iranian teachers are doing a great job, Ayatollah Khamenei said that Twelve years of school is the greatest opportunity for the Islamic Republic to properly transmit the values, and ideals of the Revolution to the young generation and to institutionalize the Islamic and Iranian identity.”

Emphazing the importance of national identity for students, the Leader also stressed that all students in schools must get acquainted with the honors and national figures of the country.

According to Leader’s guidlines, young generation enjoys Islamic-Iranian identity and must grow up with the thoughts and ideas of Imam Khomeni (RA).

Human resources are the infrastructure of any civilization, the Leader said, attaching importance to the role of teachers who teach a generation that they will be founders of the new Islamic civilization in the future.