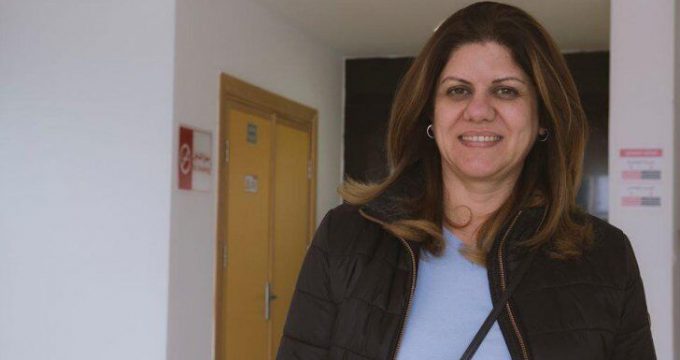 Condemnations have been pouring in from different quarters on the cold-blooded murder of a Palestinian journalist by Israeli regime forces in the occupied West Bank on Wednesday.

Iran, together with the resistance groups from Palestine and Lebanon, strongly condemned the murder of Al Jazeera journalist Shireen Abu Akleh, calling it a “crime” and “an attack targeting truth.”

Abu Akleh, 51, was shot in the head when she was covering an Israeli military raid on the Jenin refugee camp in the occupied West Bank, the Palestinian health ministry said.

She was immediately rushed to a hospital in critical condition but was declared dead.

Ali Samoudi, another Palestinian journalist for the Al Jazeera channel, was hospitalized in stable condition after being shot in the back.

Iran’s foreign ministry spokesman, Saeed Khatibzadeh, denounced the fatal attack and commiserated with her family, the Qatar-based channel, and journalists committed to the Palestinian cause.

“The criminal act is clear proof of the Zionist regime’s utter disregard for the role of the press, media, and journalists and the position they hold to inform public opinion,” Khatibzadeh said.

“The Israeli propaganda machine and its affiliated media outlets, contrary to the ongoing false claims, are afraid of dissemination of truth and accurate news reports and they go as far as to even kill journalists.”

The ministry spokesman called on international institutions, human rights organizations as well as international media unions to conduct an independent investigation into Abu Akleh’s death and hold Israel to account for the crime.

He also dismissed the Tel Aviv regime’s offer for a probe into the Palestinian journalist’s killing as an eyewash and devoid of any credibility.

Iran’s government spokesman Ali Bahadori Jahromi also lashed out at the occupying regime in Tel Aviv over the diabolic crime, calling it an attack on media freedom.

“The Zionist regime’s crime in killing Palestinian journalist Shireen Abu Akleh is an attack on freedom of the media and a violation of international law,” he wrote in a post on Twitter.

“The Israeli state terrorism has repeatedly shown it knows no boundaries in [commiting acts of ] terror and crime, and has got used to killing children, women, journalists, and innocent citizens.”

The head of the Islamic Republic of Iran Broadcasting (IRIB) World Service, Dr. Ahmad Norouzi, in a statement also denounced the attack on the veteran Palestinian journalist.

He expressed solidarity with international journalists who honestly and passionately report on Israeli war crimes in the occupied Palestinian territories, without caring for consequences.

Dr. Norouzi blasted Israel’s relentless witchhunt against the Palestinian media fraternity and targeted killings of journalists that shed light on the regime’s unchecked aggression against oppressed Palestinians in the holy city of al-Quds and elsewhere across the occupied territories.

“These crimes have undoubtedly targeted not only journalists but also doctors, nurses, and those who are known to be immune to any military aggression in accordance with international treaties and principles.

“Shireen Abu Akleh joined the ranks of victims of the Zionist regime’s aggression against human rights, humanity, and freedom. She will be remembered fondly by all,” Norouzi pointed out.

The head of the IRIB World Service, underscoring the challenges confronted by free media, said his colleagues have time and again suffered harm while exposing the Israeli regime’s vicious plots against the Palestinian nation and other regional states.

The Lebanese Hezbollah resistance movement also condemned Abu Akleh’s killing, stressing that the Israeli regime was trying to muzzle the voice of journalists to cover its crimes.

It urged media organizations, the United Nations, and rights groups to denounce Israel in international forums, and prevent the regime’s acts of aggression against Palestinian journalists.

Osama al-Qawasmi, a member of the Palestine Liberation Organization (PLO), described her death as an attack against the truth.

Qawasemi said in a statement that the Tel Aviv regime, by murdering Abu Akleh, conveyed the message that it will target anyone who dares to speak and report the truth.

The spokesman of the Palestinian Authority, Ibrahim Milhim, said his government rejects any role for Israel in an investigation into Abu Akleh’s killing.

“Let me ask, when does the criminal have the right to take part in the investigation against his victim?” Milhim was quoted as saying by Al Jazeera.

“We reject and refuse the participation of any Israelis in this kind of investigation. They have to be taken to the International Court. We call on the ICJ to open an investigation into the killing of Shireen and other crimes committed against the Palestinians.”

The Islamic Jihad Movement also condemned the killing of an Al Jazeera journalist, terming Abu Akleh’s killing as a failed Israeli attempt to hide the truth.

Anthony Bellanger, the secretary of the International Federation of Journalists (IFJ) termed Abu Akleh’s killing as a “deliberate systematic targeting of a journalist”.

“Yet again journalists, wearing press vests, clearly identified were targeted by Israeli snipers,” he said in a statement. “We will seek to add this case to the ICC complaint submitted by the IFJ, detailing such systematic targeting.”

The syndicate held the Israeli occupation forces “fully responsible for this heinous crime against press freedom”, particularly after World Press Freedom Day, marked on May 8.

It stressed that the crime of the occupying regime that targeted Abu Akleh is “a deliberate and premeditated act and a true assassination operation”.

The syndicate asked for measures to protect journalists in the occupied territories from the “continued incitement and killing practiced by the Israeli occupation and all components of the occupation”.

The People’s Assembly of Syria also condemned the assassination of Palestinian journalist Shireen Abu Akleh at the hands of the Israeli forces in the occupied Palestinian territories.

The legislative authority said in a statement that dozens of Syrian and Palestinian media professionals have sacrificed their lives for the sake of truth while exposing Israeli crimes.

In video footage of the incident, Abu Akleh can be seen wearing a blue flak jacket marked with the word “PRESS.”

Samoudi, her injured colleague, told The Associated Press they were among a group of seven reporters who went to cover the raid early Wednesday.

He said they were all wearing protective gear that clearly marked them as reporters, and they passed by Israeli troops so the soldiers would see them and know that they were there.

The journalist said the first shot missed them, then a second struck him, and a third killed Abu Akleh. He said there were no combatants or other civilians in the area — only the reporters and Israeli army troops.

Shaza Hanaysheh, a reporter with a Palestinian news website who was also among the reporters, gave a similar account, stressing there were no clashes or shooting in the immediate area.

She said that when the shots rang out she and Abu Akleh ran toward a tree to take shelter.

“I reached the tree before Shireen. She fell on the ground,” Hanaysheh said. “The soldiers did not stop shooting even after she fell. Every time I extended my hand to pull Shireen, the soldiers fired at us.”

The Palestinian Ministry of Information condemned what it said was a “shocking crime” committed by Israeli forces.

“The Israeli occupation has repeatedly targeted, injured, and assaulted Palestinian journalists. Shireen joins other journalists that Israel killed as they worked on revealing the crimes of the Israeli occupation. The killing can never deter our people from continuing the struggle for freedom, will only shorten the life of the occupying regime and will bring us closer to freedom and an end to Israeli impunity,” it said.