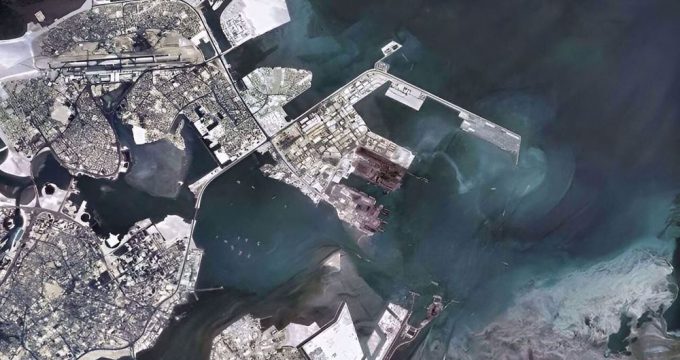 Iranian media have released first images received from a home-grown satellite that were put into orbit in March as authorities hail the development as a major success for a civilian space program  that has progressed in recent years despite facing American sanctions.

The official IRNA news agency on Tuesday publishes images received from Noor 2 satellite with views to agriculture lands in southern Iranian provinces of Fars and Bushehr.

Another image taken by Noor 2 and published by IRNA purportedly showed a view to the headquarters of the United States Fifth Fleet in the Persian Gulf Island of Bahrain.

The images are the first high-resolution color images received from an Iranian satellite.

They come two months after Noor 2 was put on an altitude of 500 kilometers (311 miles) into orbit by Iran’s Islamic Revolution Guard Corps (IRGC).

Iran’s telecoms minister Issa Zarepour hailed the publication of images as a great success and said the achievement is a blow to American sanctions targeting Iran’s civilian space program.

“Who would have thought that one day an Iranian satellite stationed at an orbit of 500 km can carry out color imaging from the entire surface of the Earth and send the images to ground stations that have also been built by the Iranian youth,” said Zarepour in an Instgram post.

Noor means light in Persian. The IRGC plans to send a series of Noor satellites into space in coming years as part of Iran’s efforts to station scientific, research and defense satellites in low-earth orbit.

A first Noor satellite had been placed into orbit in April 2020 at an altitude of 425km (265 miles) above the earth’s surface.

Iran's Noor 2 satellite May 11, 2022 no comments
Iran hands out $1.5bn worth of cash subsidy to over 23.6 million households
Iran calls for release of diplomat in Belgium detained on false charges