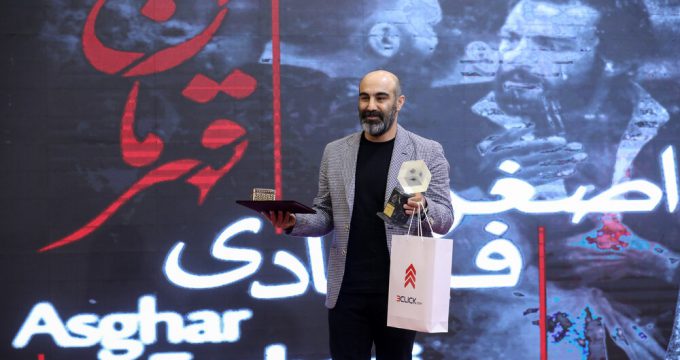 After garnering dozens of honors at international events for “A Hero”, Asghar Farhadi scored his first domestic award for this acclaimed drama at the 1st Iran Screen Directors Celebration on Sunday.

The gala has been initiated by the Directors Guild of Iran to select the best directors of the year in cinema and home video network productions.

Due to his working on a new project abroad, Farhadi could not attend the celebration, however, he joined his colleagues via a live video link.

“I congratulate all friends whose films were judged at this celebration, and I send my grateful thanks to those people who make us interested in cinema; those people who laid the cornerstone of Iranian cinema,” Farhadi said.

Mohsen Tanabandeh, an “A Hero” star, received the award on the behalf of Farhadi.

Cinema Organization of Iran director Mohammad Khazaei was among the guests during the celebration, which was held at the Esteqlal Hotel.

In his short speech, Mohsen Amir-Yusefi, the president of the Directors Guild of Iran, criticized the critical conditions confronting Iranian cinema, and expressed his hope that the Cinema Organization of Iran would pave the ground for better domestic productions.

The award for best first-film director went to Bahman and Bahram Ark for their joint film “Skin”, a tale of love, magic and superstition.

Tina Pakravan was also honored for her series, “Once Upon a Time in Iran”, also known as Khatun. Also written by Pakravan, the historical romance is offered by several online VOD platforms.

“In my opinion, I don’t deserve this award, but I’m so grateful for that,” Panahandeh said after accepting the award from actor Hutan Shakiba.

Karimi, who is in London to attend the premiere of her movie “Atabai”, thanked the organizers for the honor via an online video link.

After receiving her award from writer Puria Alami, Hekmat said, “Let’s remember that we are committed to cinema, society and people, and I hope we are not contaminated with dirty money. We are not in good times; there are so many young directors and big names in Iranian cinema who have not been able to make a film over the past few years.”

The celebration went on by introducing critic Ahmad Talebinejad’s new book, “Thirty Years of the Directors Guild of Iran”.

“One of the defects in the guild was the lack of a printed document about the activities of the organization, something that was remedied by writing this book,” director Ahmad Amini said.

The organizers also saluted Payam Tabarsi, an infectious disease doctor, for his contribution to the cineastes’ community during the COVID-19 pandemic.