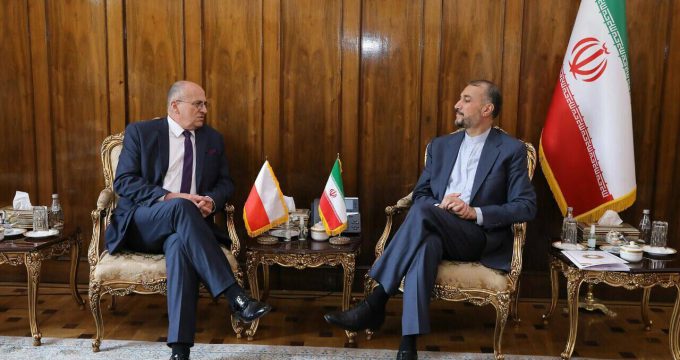 Iranian Foreign Minister Hossein Amirabdollahian in a meeting with his Polish counterpart Zbigniew Rau on Sunday stressed the expansion of bilateral relations and cooperation at the international and regional levels between Iran and Poland.

Amirabdollahian met and held talks with his Polish counterpart Zbigniew Rau in the Iranian capital on Sunday.

Emphasizing the importance of expanding bilateral relations and cooperation at the international and regional levels between Iran and Poland, Amirabdollahian praised Poland for supporting Iran to control the COVID-19 crisis by donating vaccines as well as its cooperation in the withdrawal of Iranian nationals from Ukraine.

He further elaborated on the Islamic Republic of Iran’s stances on developments in Ukraine and the region, including security and stability in Afghanistan, Iraq, and the presence of millions of Afghan refugees in Iran.

Referring to the longstanding relationship between Iran and Poland, Rau, for his part, described one of the main reasons for the trip to Tehran as the 80th anniversary of the withdrawal of Polish immigrants during World War II and thanked Iran that was hosted many Polish civilians and military personnel on its territory.