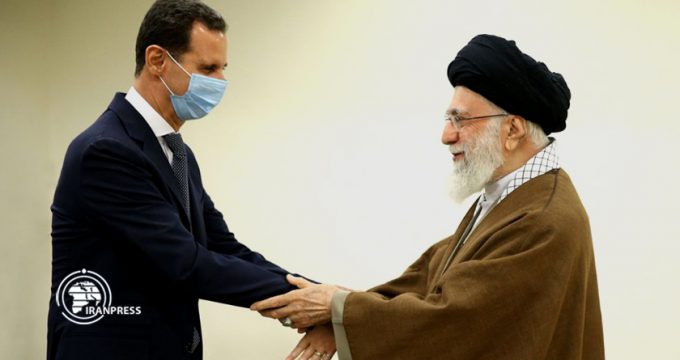 The leader of the Islamic Revolution told the Syrian president that despite the devastation by the years-long war, the country is now considered a major power.

Ayatollah Seyyed Ali Khamenei, the Leader of the Islamic Revolution, met with Syrian President Bashar al-Assad on Sunday and considered Syria’s resistance and victory in an international war as a ground for increasing Syria’s prestige, emphasizing the need for further cooperation between the two countries.

During his visit to Iran this morning, the Syrian President met separately with the Leader of the Islamic Revolution, Ayatollah Khamenei, and President Ebrahim Raisi.

This is the second visit of the President of Syria to Tehran since 2011, when Syria plunged into a war against Takfiri terrorist groups.

Referring to Syria’s outstanding achievements in the political and military fields, the Leader said: “Today, Syria is completely different from what it was before the war. Although there were no war destructions then, Syria is now much more respected and credited than ever before, and everyone sees it as a power.

Ayatollah Khamenei, emphasizing that today the nations of the region respect the President and the Syrian people, added: “Some leaders of neighboring countries have close relations and friendship with the leaders of the Zionist regime, but the people of these countries take to the streets on the International Quds Day, and this is the reality of the region today.”

He considered several factors influencing the resistance and victory of Syria in the international war and addressed al-Assad: “One of the most important factors is the high morale of your Excellency, and with this spirit, God willing, you can rebuild the ruins of the war because great things are ahead.”

Bashar al-Assad also thanked Iran for its support and said: “Iran’s position in the past four decades in regional issues, especially the issue of Palestine, showed all the people of the region that Iran is in the right path.”

Bashar al-Assad added: “Some people think that Iran’s support for the resistance front is military support, while the most important support and assistance of the Islamic Republic is to continuously elevate resistance’s spirits.”

The Syrian president emphasized: “What prevented the Zionist regime from ruling the region was the strategic relations between Iran and Syria, which must continue strongly.”