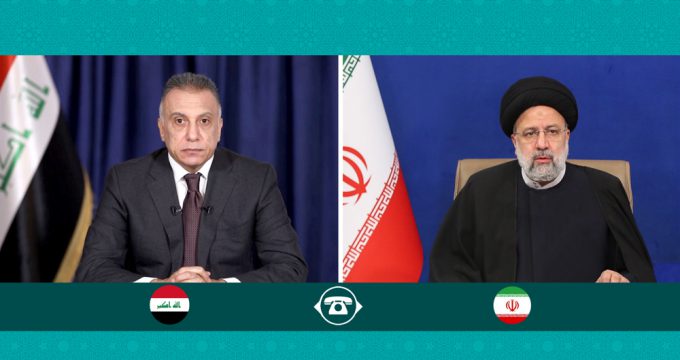 President Ebrahim Raisi says Iran has always laid emphasis on the unity and integrity of neighboring Iraq, expressing hope for the formation of a powerful government in the Arab country.

In a Wednesday phone call with Iraqi Prime Minister Mustafa al-Kadhimi, the Iranian president said he hoped that Iraq’s political process, which started with last year’s parliamentary elections, would lead to the establishment of a strong government as soon as possible.

Kadhimi, for his part, offered congratulations to Raisi on the occasion of Eid al-Fitr and hailed Iran’s support for his country.

Iraq has so far failed to elect a new president due to a lack of quorum in the parliament, prolonging a bitter deadlock in Iraqi politics months after a general election considerably changed the make-up of the parliament.

Iraqi parliamentary elections were held on October 10 last year, the fifth in Iraq since the US-led invasion of the Arab country in 2003.

They were originally planned to be held in 2022, but the date was brought forward in the wake of a mass protest movement that broke out in 2019 to call for economic reforms, better public services, and an effective fight against unemployment and corruption in state institutions.

In another phone conversation with Indonesian President Joko Widodo on Wednesday, Raisi said Palestine is an important issue in the Muslim world.

“Muslim countries must have cohesion and unityin defending the struggles of the Palestinian people” against Israeli occupation, the Iranian president added.

Referring to the two countries’ diverse capacities, he noted that Tehran and Jakarta can develop relations in all fields through joint efforts to activate their potentialities.

“The Islamic Republic of Iran seeks to promote its relations, with the priority of friendly countries, in regional and international fields,” Raisi said.

The Indonesian president, for his part, said his country is keen to boost bilateral, regional and international cooperation with Iran, especially in the fields of energy and health.

Widodo added that Iran and Indonesia have cultural commonalities and close stances on regional and international issues, including their support the Palestinian people’s goals.