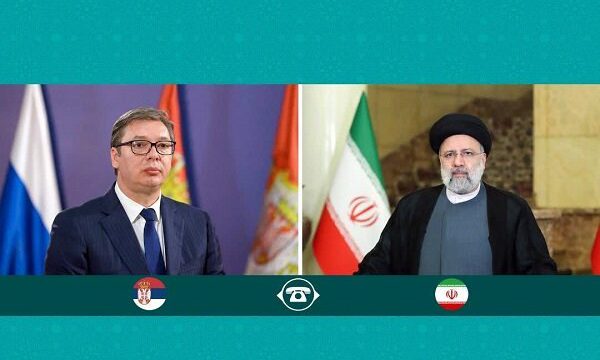 Iranian President Seyyed Ebrahim Raisi said that the two countries of Iran and Serbia enjoy diversified and high capacities to broaden their bilateral relations in all fields.

In a telephone conversation with Serbian President Aleksandar Vučić on Monday evening, Raisi emphasized that Tehran and Belgrade have high capacities and potentials to expand mutual ties.

The diversified capacities existing between Iran and Serbia have paved suitable ways for the two countries to further promote their interactions and relations in all fields, Iranian President added.

President Raeisi invited his Serbian counterpart to pay a visit to the Islamic Republic of Iran for enhancing and strengthening bilateral relations.

Serbian president, for his part, congratulated the Eid al-Fitr to President Raisi and noble people of the country and stressed that the two countries of Iran and Serbia enjoy high capacities to broaden their ties at the highest level.

While expressing his vehement interest in visiting Iran, Aleksandar Vučić said that he would bring the highest level of accompanying delegation to Iran, so that the two countries can discuss and consult on all available areas for expanding cooperation.