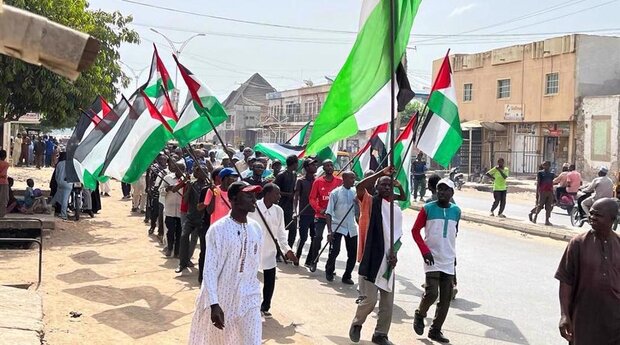 Nigerians rally in solidarity with Palestinians on Quds Day

Nigerian people have taken to the streets in the northern city of Kano to show solidarity with the oppressed Palestinians on International Quds Day.

Some of the protesters held pictures of Sheikh Ibrahim Zakzaky, the leader of the Islamic movement in Nigeria on the eve of the Quds Day asking the Nigerian government to allow the cleric to go abroad for medical treatment.

Sheikh Zakzaki was released from prison last year. He had been detained by the army in 2015 following a deadly raid on his home. He still suffers from serious health problems caused by gunshot wounds.

International Quds Day is an opportunity to express solidarity with the Palestinians and condemn the Zionist regime. The event comes amid heightened tensions between Israeli forces and Palestinians across the occupied Palestinian territories.