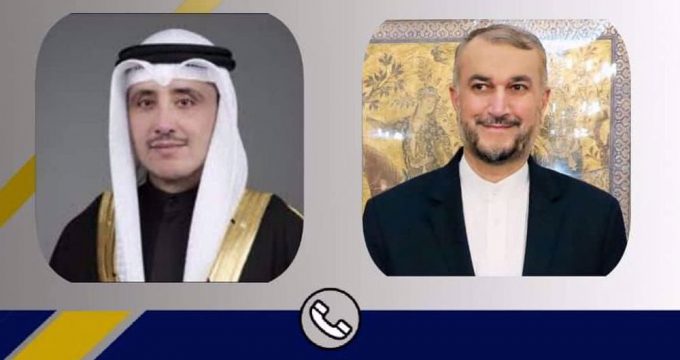 Iranian Foreign Minister Hossein Amir-Abdollahian has underscored the importance of unity among the Muslim world in confronting the Israeli atrocities against Palestinians in the occupied territories amid ramped-up escalation of violence in al-Aqsa Mosque prior to International Quds Day which falls on the last Friday of the holy fasting month of Ramadan.

Amir-Abdollahian made the remark in a Thursday phone conversation with his Kuwaiti counterpart, Sheikh Ahmad Nasser al-Mohammad al-Jaber Al Sabah, during which the two sides discussed regional and global developments as well as the situation in Palestine.

Pointing to the desecration of al-Aqsa Mosque by the Israeli occupation forces and the commemoration of International Quds Day, Amir-Abdollahian stressed the need for the unity of the Muslim world against the Zionist regime’s crimes and defending the sanctity of the holy site.

The top Iranian diplomat also praised the position of the government and people of Kuwait in condemning the occupying regime’s atrocities in al-Quds and their support for the Palestinian cause.

Elsewhere in the phone conversation, Amir-Abdollahian welcomed the holding of the ceasefire in Yemen and expressed hope for an end to the humanitarian siege of the war-ravaged country and hoped that Yemeni-Yemeni talks would be held as soon as possible.

Sabah, for his part, lambasted the desecration of al-Aqsa Mosque and stressed that, “al-Quds is a red line for the Muslim world, and Islamic countries, by consolidating their common stance, must confront the crimes perpetrated by the occupying regime.”

The Kuwaiti foreign minister appreciated the constructive positions of Iran in helping a ceasefire in Yemen and expressed hope that a permanent ceasefire would hold in the impoverished Arab country.

Tensions between Palestinians and Israelis have ramped up since the beginning of Ramadan, with the occupation forces stepping up raids of al-Aqsa Mosque, assaulting Muslim worshipers inside prayer halls, and providing protection to the Israeli settlers desecrating Islam’s third holiest site.

Last Friday, at least 150,000 Palestinians thronged al-Aqsa Mosque to attend prayers, despite restrictions imposed on the entry of worshipers to the holy site.

On the same day, Israeli forces raided the mosque after dawn prayers and fired rubber-coated bullets, stun grenades and tear gas at the Palestinian worshipers at the Dome of the Rock inside the compound.

The latest wave of Israeli crimes has sparked widespread condemnation from Muslims and other supporters of the Palestinian cause across the world.

The persisting violence has also fueled fears among Israelis of an outbreak of a new war with Gaza.