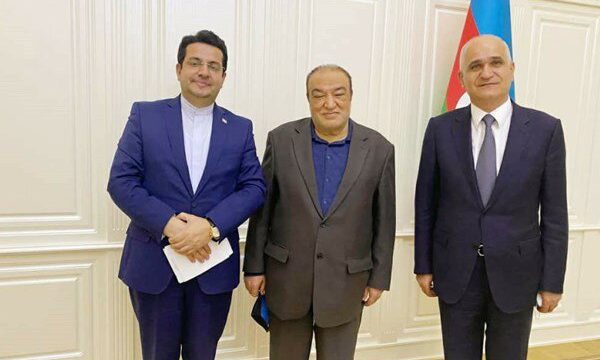 In separate meetings with his Azeri counterpart Khalaf Khalafov and First Deputy Prime Minister of Azerbaijan Shahin Mustafayev, the Iranian diplomat reviewed Tehran-Baku relations and joint projects as well as reconstruction of the Karabakh region.

Iran’s Ambassador to Baku Abbas Mousavi was also present at the meetings.

Iran and Azerbaijan enjoy friendly relations. On March 13, Seymour Mammadov, director of the international expert club EurAsiaAz and editor-in-chief of Azerbaijan news agency Baku Tribune, wrote in a note that the two capitals signed a historic memorandum of understanding in Baku on the 30th anniversary of the establishment of diplomatic relations between the two states.

According to Mammadov, the document was signed for the creation of new communication links between the East Zangezur economic region of Azerbaijan and the Nakhchivan Autonomous Republic through the territory of Iran.

He added that despite the ongoing pandemic, in 2021, Tehran-Baku mutual trade increased by 30 percent, while the volume of road transport between the two countries was up by 70 percent in the same year.