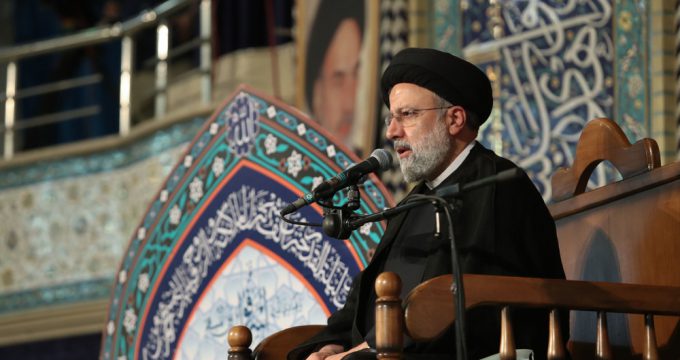 Iran’s President Ebrahim Raisi has held Western spy services and the Israeli regime responsible for violent raids by Israeli forces against Palestinian worshippers at the al-Aqsa Mosque compound in the occupied Old City of Al-Quds, as well as recent terrorist attacks in Afghanistan.

Raisi made the remarks during a ceremony in Tehran to mark Laylat al-Qadr or the Night of Destiny, a holy night in which the first verses of the Holy Qur’an were revealed to Prophet Mohammed (PBUH) some 14 centuries ago.

He described the Daesh terrorist group as the offspring of Western spy services and the Israeli regime.

“We are now witnessing crimes, similar to those perpetrated by Daesh members, being committed against Muslims and worshippers at the al-Aqsa Mosque compound as well as in mosques in Afghanistan,” Raisi said.

Iran’s president urged the ruling authorities in Kabul to protect the lives of all Afghans, including minority Shias.

“We are demanding the current [Taliban] rulers of Afghanistan to protect the lives of Muslim people, who are getting killed in mosques while fasting, and to prevent rogue elements who viciously target ordinary people and public security,” he asserted.

Raisi noted that unity and solidarity were increasing among Muslim nations, saying it would lead to the complete liberation of al-Quds, and restoration of the rights of Palestinians after more than 70 years of struggle against the occupiers.

He also called for the mass participation of people in International Quds Day rallies in Iran and other countries.

Every year on the last Friday of the holy month of Ramadan, rallies are held worldwide to express solidarity with the Palestinian people in their struggle for the liberation of occupied territories.

Millions of pro-Palestinian demonstrators, including Muslims and non-Muslims, take to the streets to denounce Israel’s atrocities against the people of Palestine.

This year’s Quds Day rallies will be held across the world on Friday, April 30.

Raisi also stressed that the fate of the Palestinian nation was to be determined by resistance fighters active in the occupied West Bank and the besieged Gaza Strip, rather than on the negotiating table in the presence of outsiders.

“Until recently it was thought that the fate of the Palestinian people would be decided at the negotiating table; however it is now determined by the willpower of combatants,” he said.

In other remarks, Raisi said enemies are in complete control of the mainstream media outlets around the world, twisting the truth and are giving a distorted presentation of developments taking place around the world to the international community.

“Today, anyone who has the ability to speak his mind and write opinions must contribute his share and actively play his role,” the Iranian president said.

By PRESS TV
Daesh terrorist group, Israel’s attack on al-Aqsa Mosque, terrorist attacks in afghanistan April 23, 2022
US admin. should have the courage to correct past mistakes: Iran FM on sanctions
Daesh’s presence in Afghanistan has led to escalation of terrorist acts in the region: diplomat