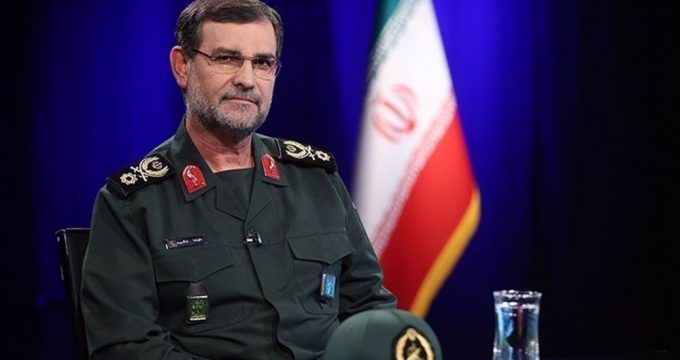 A top commander of Iran’s Islamic Revolution Guards Corps (IRGC) has reaffirmed his country’s resolve to avenge the assassination of Lt. General Qassem Soleimani, calling it a certainty.

Speaking at an event in the southwestern city of Shiraz on Wednesday, Rear Admiral Alireza Tangsiri, commander of the naval unit of the IRGC, said Americans have been sending messages to Iran, asking it to abandon its vow to avenge the assassination of the celebrated anti-terror commander.

In return, they have offered to lift cruel sanctions on Iran, he said, calling it “wishful thinking”.

“They constantly send messages saying they will offer rewards and remove certain sanctions if we give up seeking revenge for Soleimani,” he said. “But this is wishful thinking. The Leader of the Islamic Revolution insists on taking revenge, and the IRGC commander has said that revenge is inevitable.”

He, however, said that “the time and place for it” will be determined by Iran.

Tangsiri said all those involved in the assassination of Gen. Soleimani’s “will be brought to justice,” quoting the Leader of Islamic Revolution Ayatollah Seyed Ali Khamenei: “God-willing, they will surely be punished for their filthy act in this world.”

Gen. Soleimani, who headed the IRGC’s Quds Force, and Abu Mahdi al-Muhandis, deputy head of Iraq’s Popular Mobilization Units (PMU), were assassinated along with their associates in a US drone strike near Baghdad International Airport on January 3, 2020.

The midnight strike led to dramatic developments in the region and brought the two countries to the brink of direct military confrontation.

The US terrorist attack drew a wave of condemnation from officials and resistance movements across the region and sparked massive protests throughout the world.

Less than a week later, IRGC fired a volley of missiles on the US-run Ain al-Assad airbase in Iraq’s western province of Anbar, which resulted in severe brain injuries to American forces stationed there.

The leader of the Islamic Revolution termed it a “slap” on the face of Americans while insisting that actual revenge was to come later, which will be determined by Iran.

Iraqi lawmakers also approved a bill two days after the incident, demanding the expulsion of all US-led foreign military forces from the country, which Iran said was part of the revenge.

Tangsiri said the enemy had thought they succeeded in eliminating Gen. Soleimani, “but you can see how Haj Ghassem has gained popularity all over the world”, she asserted.

Both anti-terror commanders were admired across the world for playing a key role in decimating the US-sponsored Daesh Takfiri terrorist group in the region, particularly in Iraq and Syria.

The remarks by IRGC’s navy commander came days after Iran’s foreign ministry spokesman Saeed Khatibzadeh asserted that “perpetrators, officials, accomplices and advisers” in the dastardly act “will not go unpunished”, insisting that “these people must be brought to justice.”

Addressing the weekly conference on Monday, Khatibzadeh stressed that no agreement will be reached in Vienna until there is total consensus on key issues of contention, blaming the US for pursuing “a policy of procrastination.”

“We will not agree on anything until we agree on the generalities,” he said, noting that certain issues remain unresolved and that the deal, officially known as the Joint Comprehensive Plan of Action (JCPOA), will not see any changes under a new agreement.

Negotiations to lift the sanctions and get the US back on the table have been underway in the Austrian capital since April last year. While both sides have noted progress, key sticking points have prevented a breakthrough.

Iran insists that it has forwarded its proposal to the US through European Union’s chief negotiator in JCPOA talks, Enrique Mora, and the ball is now in Washington’s court.

“We have repeatedly stressed [to Washington] that Iran is not willing to abandon its red lines,” Iran’s Foreign Minister Hossein Amirabdollahian said.

Biden administration, which had vowed to reverse the radical measures taken by the former administration, has so far been following the same roadmap, refusing to lift sanctions.

Tehran maintains that the Trump-era policy has failed miserably. The Joe Biden administration agrees, yet it has not taken any tangible steps to deliver on its promise of ending the policy.

Trump unilaterally withdrew from the multilateral agreement in May 2018, and reinstated crippling sanctions on Iran, despite Tehran fully complying with the terms of the deal.

One of the key sticking points has been the de-listing of IRGC, which Iranian officials insist is part of the country’s military forces and cannot be sanctioned.