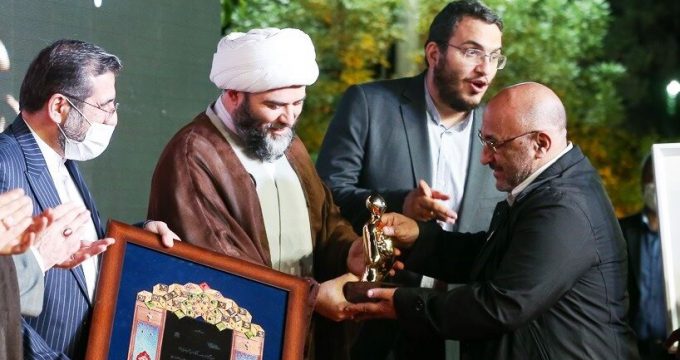 Painter Abdolhamid Qadirian has been named the Islamic Revolution Artist of the Year.

He was honored with the title on the closing day of the Islamic Revolution Art Week on Friday during a special ceremony attended by the managers of the Art Bureau of the Islamic Ideology Dissemination Organization (IIDO), the organizers of the event.

Earlier on Thursday, he was honored along with five other artists in different media as the top visual artists of the year by the organizers of the Islamic Revolution Art Week.

“During the [1980-1988 Iran-Iraq] war, the culture of Imam Hussein (AS) spread nationwide and became strengthened and we benefitted from it, and, as a result, numerous books on the war were published,” said Qadirian after receiving his award from IIDO director Hojjatoleslam Mohammad Qomi.

“At present, the nature of the war has changed and the perspective on the war, which has been expressed by the Leader of the Islamic Revolution, is different,” he added.

“In this new situation, we need a new wing to fly toward the brilliant future; we need a fountain of knowledge to enable us to fly. Therefore, it’s time to consider the powerful and eternal wing of belief in Imam Mahdi (AS) as the promised Savior,” Qadirian stated.

“I hope we can make good use of the belief in Imam Mahdi (AS) as much we used the culture of Imam Hussein (AS),” he said in conclusion.

In his short speech, Qomi expressed his thanks to the founders of the Islamic Revolution Art Week, which celebrated its eighth anniversary this year.

“Organizing this event as the standard-bearer of the school of revolutionary art has now increased in importance,” he said.

The Islamic Revolution Art Week is organized every year to commemorate the martyrdom anniversary of documentarian Morteza Avini.

He was killed by a landmine in 1993 during his last trip to the former Iran-Iraq war zone in southwestern Iran while making a documentary about soldiers who were still listed as missing in action.