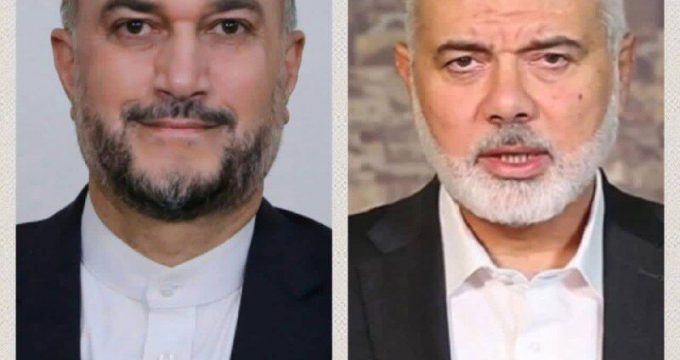 Speaking in a phone call with Chairman of the Hamas Political Bureau Ismail Haniyeh, Amirabdollahian slammed desecration of the holy places by the Zionist regime.

Undoubtedly, the Zionist regime has become too weak to tolerate the Palestinians’ movements and the Resistance that created “Saif al-Quds” (Sword of al-Quds’) epic.

Today, the Resistance is in its best position, while the Zionist terrorist regime is in its weakest conditions, he added.

Iran supports formation of an integrated Palestinian government throughout the historic land with Holy Quds as its capital, he stated.

He stressed the importance of diplomatic consultations with foreign ministers of Islamic countries to condemn and stop the Zionist regime’s aggressive actions.

Amirabdollahian described the Zionist regime’s aggression against worshipers and desecrating Al-Aqsa Mosque as inappropriate effects of normalizing relations with fake Israeli regime by some Arab-Islamic countries.

Meanwhile, Haniyeh elaborated on the recent crimes in Al-Aqsa Mosque, saying that Palestine is facing with two options: accepting the Judaization of Al-Aqsa Mosque or standing against the Zionist regime.

Palestinian people and the resistance groups have chosen the path of resistance with power, Haniyeh said during the conversation.

He appreciated Iran’s support for the Palestinian cause, Holy Quds and Al-Aqsa Mosque.

He also called for increasing diplomatic consultations at the level of Islamic countries, the Organization of Islamic Cooperation (OIC), and the United Nations Security Council to condemn and stop the Zionist regime’s aggression.

In the wake of escalation of tension and aggression by the Zionist regime, dozens of Palestinians have been martyred and hundreds injured since the beginning of the holy month of Ramadan.