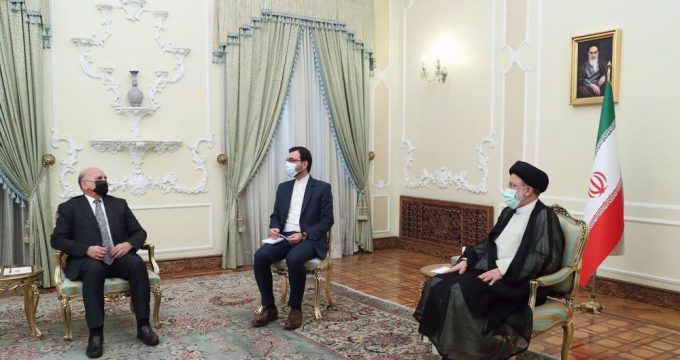 Pres. Raisi: Iran will not allow Israel to threaten regional security through any country

Iran’s President Ebrahim Raisi says the Islamic Republic is closely monitoring Israel’s regional activities and will not allow the regime to threaten security of the region via any country.

Raisi made the remarks in a Thursday meeting with visiting Iraqi Foreign Minister Fuad Hussein, during which he emphasized the close ties between Tehran and Baghdad, saying no enemy can ever draw a wedge between the two countries.

He added that Iran expects its neighbors, especially Iraq, not to allow any presence on their soil, which would threaten the security of the Islamic Republic of Iran.

“The Islamic Republic of Iran has proved its brotherhood toward its neighbors in practice…. therefore, we expect the neighboring countries to remain vigilant toward the enemies’ plots.

“The Islamic Republic of Iran is closely monitoring the [regional] moves of the Zionist regime and cooperation with this infanticide regime cannot be hidden. We will by no means allow them to threaten the security of the region through any country, especially Iraq,” Iran’s president said.

“The Islamic Republic of Iran has always underlined the importance of [maintaining] solidarity, territorial integrity and unity among all ethnic groups and religious denominations in Iraq, which would lead to stability” in the country, he said.

Iran’s president noted that the security of Iraq must be established by Iraqis and presence of foreigners in Iraq will not lead to security in that country.

In another part of his remarks, Raisi said the Daesh Takfiri terrorist group is made by the United States and Israel and is now acting on their behalf in Afghanistan.

The Iraqi foreign minister, for his part, said Iraq considers itself not only a neighbor for Iran, but also an ally and friend.

He added that the Iraqi territory will never allow any measure against security of Iran, adding that Baghdad is ready to boost security cooperation with Tehran to prevent any security threats against the interests of the Islamic Republic of Iran.

Earlier on Thursday, the commander of the Quds Force of Iran’s Islamic Revolution Guards Corps (IRGC) warned the Islamic Republic will harshly confront the Israeli regime wherever it deems necessary.

“If an act of aggression is carried out against the interests of the Islamic establishment anywhere in the world, we will respond with seriousness,” Brigadier General Esmail Qa’ani said.

“In Erbil, many people who lived next to you did not know [the attacked site] was your base, but you had been under our surveillance,” he said, addressing the Zionists.

The IRGC strike in March targeted “strategic center of Zionist conspiracy and evil” in Erbil in response to an Israeli airstrike on the Syrian capital of Damascus, in which two officers of Iran’s elite force lost their lives.