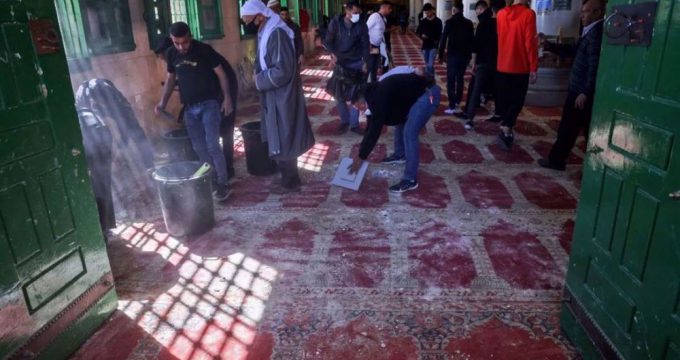 Iranian Foreign Minister Hossein Amir-Abdollahian has denounced the Israeli regime’s attack at al-Aqsa Mosque, saying resistance is alive while the Zionists are in desperation.

“Undoubtedly, the Zionist regime has become too weak to withstand the uprising of the Palestinian people and the resistance that created the epic of Operation al-Quds Sword,” Amir-Abdollahian said in a Friday phone call with Ismail Haniyeh, head of the political bureau of the Palestinian resistance movement Hamas.

“Today, resistance is at its best situation while the Zionist terrorist regime is at its weakest position.”

He said the attack was among inappropriate outcomes of the move by few Arab and Muslim countries in normalizing ties with the Israeli regime, urging support for the Palestinian people who are bravely defending Muslim nations’ dignity.
More than 150 Palestinian worshipers were injured when Israeli forces stormed the al-Aqsa Mosque compound in the occupied Old City of al-Quds.

Iranian Foreign Ministry spokesman Saeed Khatibzadeh on Friday censured the Zionists’ “shameless” acts of violence at holy sites in Palestine and against the fasting people and worshipers at the mosque in the month of Ramadan.

“Crimes of the Zionists against the oppressed Palestinian people show the deepening weakness of this occupying regime, which is only resorting to assaults on the defenseless worshipers to cover up its hollow power,” the Iranian official said.

More than 150 Palestinian worshipers were injured when Israeli forces stormed the al-Aqsa Mosque compound in the occupied Old City of al-Quds.

The Palestinian news agency Ma’an said the violence broke out at dawn on Friday, when the occupation forces raided the mosque through the Moroccan Gate, also known as the Mughrabi Gate, randomly firing sound bombs and rubber bullets at the worshipers.

Media reports said the Israeli troops also attacked paramedics and press crews, chased them in the courtyards of the mosque, and beat a number of them.

The Iranian spokesman also underscored certain Arab and Muslim countries’ normalization of ties with Israel as betrayal of the Palestinian cause. He said the regime will in no way change its behavior toward the Palestinians and keep committing crimes against the oppressed nation. “We are now witnessing the unbridled violence of this apartheid and racist regime.”

Egypt and Jordan maintained full diplomatic relations with the occupying regime after signing peace treaties in 1979 and 1994, respectively. Four Arab countries – the United Arab Emirates (UAE), Bahrain, Sudan and Morocco – agreed to normalize relations with Israel under US-brokered agreements in 2020, when President Donald Trump was in office.

Spearheaded by the UAE, the move has sparked widespread condemnations from the Palestinians as well as nations and human rights advocates across the world, not least within the Muslim world.

Khatibzadeh also urged Muslim nations to support the al-Aqsa Mosque. He said the Israeli regime and its regional and international allies are responsible for the consequences of the Zionist measures in al-Quds and Palestine. The Iranian official called for the Organization of Islamic Cooperation to candidly come out in support of the al-Aqsa Mosque.

The Tel Aviv regime has stepped up its deadly acts of aggression across the Palestinian territories since the beginning of Ramadan, as a result of which Palestinians have put up a stronger resistance.

Some two dozen Palestinians have been killed by Israeli fire since March 22. Israeli Prime Minister Naftali Bennett has already given Israeli forces a free hand to “defeat” what he brazenly labels “terror” in the occupied West Bank.