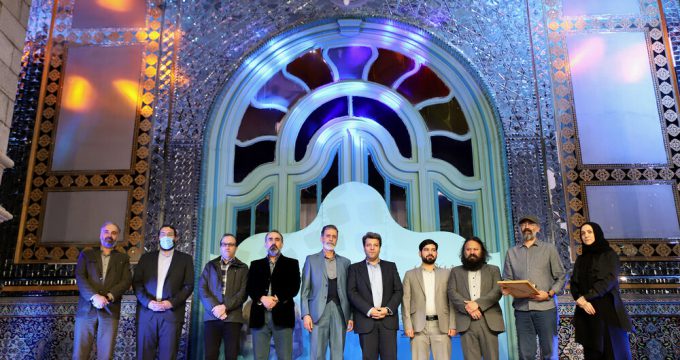 Top stage and screen artists of the year were honored on Sunday as part of the programs for the Islamic Revolution Art Week.

Aaj was awarded for writing and directing “Daddy Adam”, a play which presents the transformation of the Mojahedin-e-Khalq from a people’s organization into a terrorist group.

Esmaeili was honored for staging “Season of Being Madly in Love”, a multimedia performance about the fall of Adam (AS) and the appearance of Imam Mahdi (AS). The open-air performance was held across the country.

Playwright Qaderi received an award for his lifetime achievements.

Sarshar, former director of IRIB Puya Channel, was honored for his lifetime achievements in animated films.

Director Sarmadi was selected for the feature film “Mansur” and his 8-episode documentary “Syria: A Report on a Major Crisis”.

Directly based on a true story, “Mansur” portrays the efforts the late commander-in-chief of the Iran Air Force, Mansur Sattari, and his team of experts made during the 1980s to produce Iran’s first jet strike fighter, Azarakhsh.

Sattari was one of the main Iranian commanders during the Iran-Iraq war. He was killed in a plane crash near Isfahan in 1995.

At the time, he and his colleagues were working on the project “Owj 110”, which Iran initiated to make Azarakhsh.

Actor and director Hejazifar was picked for his acclaimed directorial debut “The Situation of Mehdi”, which depicts part of the life story of Mehdi Bakeri, the chief of IRGC 31st Shura Division that carried out several major operations during the 1980-1988 Iran-Iraq war, and his brother Hamid.

The art week is organized by the Art Bureau every year to commemorate the martyrdom anniversary of documentarian Morteza Avini.

He was killed by a landmine in 1993 during his last trip to the former Iran-Iraq war zone in southwestern Iran while making a documentary about soldiers who were still listed as missing in action.