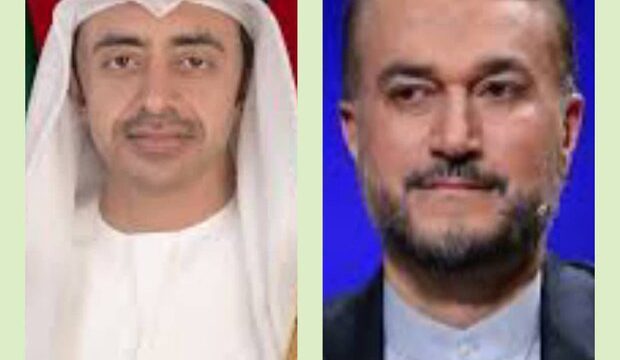 Stating that Iran wants nothing but prosperity, security and progress for its neighbors, the region and the UAE, the Iranian Foreign Minister said that the Zionists have been and are the root of insecurity in the region.

“The presence of the Zionist regime in the region is a threat to all the regional countries,” said Hossein Amir-Abdollahian in a phone call with his Emirati counterpart, Sheikh Abdullah bin Zayed bin Sultan Al Nahyan on Saturday.

“We want nothing but prosperity, security and progress for our neighbors, the region and the UAE, but the Zionists have been and are the root of insecurity in the region,” he added.

Emirati foreign minister, for his part, expressed hope that the deep-rooted relations between the two countries would expand even more.

He also pointed to the recent developments in the region, saying, “In recent weeks, the situation in the region has improved, and President Bashar al-Assad’s visit to the UAE and the imposition of a temporary ceasefire in Yemen have provided an opportunity for all parties to use it to develop relations and avoid escalating tensions.”

“The UAE will not allow any act of sabotage to take place from its territory against the neighboring countries,” he noted.