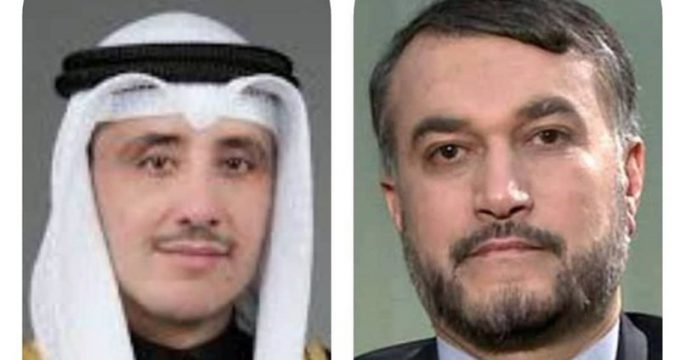 Kuwait Ready for Talks with Iran on Exploitation of Joint Fields

The foreign minister of Kuwait expressed his country’s readiness to resume the legal negotiations with Iran about demarcation of the maritime boundaries and exploitation of the joint oil and gas fields.

Congratulating the Iranian government and people on the holy month of Ramadan, the top Kuwaiti diplomat underscored his country’s determination to expand relations with the Islamic Republic.

In response to a question about the need to demarcate the maritime border and to use the common fields by the two countries, Al-Sabah announced Kuwait’s readiness to resume legal talks with Iran over the issue, the Foreign Ministry’s website reported.

He also expressed hope that the ceasefire in Yemen would hold and pave the way for talks between the Yemeni factions and the resolution of the Yemen crisis.

For his part, Amirabdollahian declared Iran’s readiness for enhancing bilateral ties with Kuwait and for regional talks.

He underlined that the government of Iran, within the framework of its policy to develop ties with neighbors in all areas, stresses practical regional cooperation.

The Iranian foreign minister also referred to the ceasefire in Yemen, saying Iran welcomes the truce and stresses the need for the full removal of the siege on Yemen and for the delivery of humanitarian aid to the Arab country.

Amirabdollahian also outlined the latest state of the Vienna talks on the removal of anti-Iran sanctions and revival of the Joint Comprehensive Plan of Action (JCPOA).