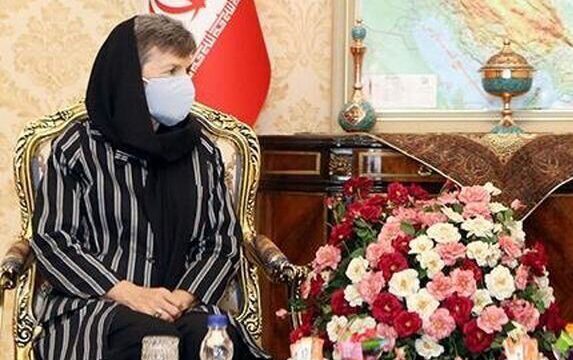 Australia ready to cooperate with Iran in fight against terrorism

Australia’s Ambassador to Tehran Lyndall Sachs said in this central Iranian city on Saturday that her country is ready to cooperate with Iran to fight terrorism.

Sachs made the remarks in a meeting with Governor General of Yazd Mehran Fatemi.

Speaking about the latest developments in Iran’s neighboring country of Afghanistan, Sachs appreciated Iran’s generosity to the nationals of Afghanistan, saying that Canberra and Tehran have the same concern about Taliban.

For his part, Yazd’s governor general said that Iran has been open for millions of Afghan refugees for over four decades as if they were Iranians’ siblings.

He went on to say that Iran has been doing so due to religious guidelines and the importance emphasized by Supreme Leader of the Islamic Revolution Ayatollah Seyyed Ali Khamenei.

In a related developments, Ambassador and Permanent Representative of the Islamic Republic of Iran to the United Nations Majid Takht Ravanchi said in late January “While the United States’ inhumane sanctions have created tremendous difficulties for our government and people, various services including education, health, medical treatment, vocational training, and employment are being provided to Afghan people living in Iran, with minimal assistance from the international community.”

As Fatemi noted, about 300,000 people from Afghanistan are living in Yazd.

He hoped that further support be extended to provide more favorable situation for the Afghan refugees.

On April 1, 2022, Iranian President Ebrahim Raisi announced that over four million Afghan people are Iran’s guests despite the claim made by the Europe over offering help for them.