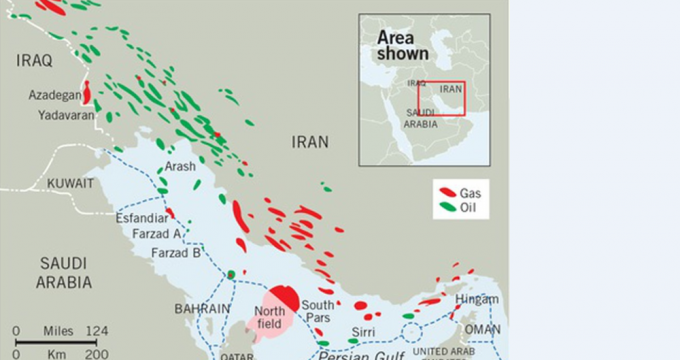 The recent decision by Kuwait and Saudi Arabia to develop the Durra offshore gas field which Iran calls Arash has revived a longstanding dispute on how to share the resources of the reservoir in the Persian Gulf.

The natural gas field is located on the maritime borders of Iran and Kuwait, but with the recent agreement, the Saudis are granting the Iranian portion of the Esfandiar oil field which it shares with Iran to Kuwait in return for the Kuwaitis giving the Iranian share of the Arash field to Saudi Arabia.

The recent signing of a document by Saudi Arabia’s energy minister Prince Abdulaziz bin Salman and the Kuwait Petroleum Corporation to develop the field opens the way for the production of at least one billion standard cubic feet per day of gas and 84,000 barrels per day (bpd) of condensate.

The sticking point here is that, firstly, Saudi Arabia has no share in Arash and secondly, according to the recent agreement, gas production is divided equally between the two Arab neighbors without considering Iran’s share in the field which is estimated to be more than 70% in Iranian waters.

The news of the agreement drew a strong reaction from Iranian officials who called it illegal, prompting Minister of Petroleum Javad Owji to announce Iran’s plan to set up a drilling rig in the field in the near future.

However, the upshot from the unilateral decision goes well beyond the Saudi incursion into Iran’s gas resources in Arash.

In order to get a grip on the situation, a brief understanding of the region’s map and its history is necessary.

An oil field with light and high quality reserves was discovered in 1960 in the middle of the Persian Gulf, which turned out to be shared between Iran and Saudi Arabia. The field is known as Esfandiar in Iranian waters and Lulu in Saudi Arabia. Esfandiar is estimated to contain 534.2 million barrels of crude oil with API gravity of 30.

The Esfandiar/Lulu field is located near the Arash/Durra reservoir in an area which also hosts the major offshore fields of d Hout and Khafji. These four fields lie in a belt which is called the divided zone.

The divided zone between Kuwait and Saudi Arabia, as one of the legacies of the British presence in the Middle East and demarcation of its borders, has always bedeviled delineation of maritime borders in the Persian Gulf.

Under an agreement in 1965 and its supplement in 1969, Saudi Arabia and Kuwait divided Durra between themselves. But, the partitioned neutral zone (PNZ) under which they have carved out the region is inaccurate and acquisitive and unacceptable to Iran.

For years, Saudi Arabia and Kuwait have taken steps to develop the four fields and export its resources. Esfandiar is already being exploited by the two countries without taking Iran’s share into account.

The recent agreement is their latest bid to tap Arash, under which the Saudis seek to surrender Iran’s share in Esfandiar to Kuwait in return for the same in Arash.

For years, the two countries have been forging documents for the purpose. For example, the Kuwaiti Oil Fires, a book written in 1995, has drawn Lulu/Esfandiar and Durra/Arash inside the tiny country outside Iran’s maritime waters.

Last week, Kuwait’s Foreign Minister Sheikh Ahmad Nasser Al Mohammad Al Sabah stated that Iran can be involved in talks on the demarcation of the Durra field without being a party to its development.

In remarks quoted by Kuwait’s official news agency Kuna, he also alleged that the field is “exclusively owned by Kuwait and Saudi Arabia”.

Earlier in the day, Sheikh Ahmad had said in a press briefing with French Foreign Minister Jean-Yves Le Drian that the gas field was a tripartite issue between Kuwait, Saudi Arabia, and Iran.

Iran began talks with Kuwait in 2000 to develop the field but no agreements were reached. In 2013, the National Iranian Oil Company said it had jackets and rigs ready to develop the field and that if talks did not lead to a development plan, it would have the right to go ahead alone.

“Comprehensive studies of the Arash joint field have been completed by drilling exploration wells and conducting seismic surveys,” Owji tweeted. “With the installation of the jacket, the drilling operation in the field will begin soon.”

Arash was discovered in 1962 in the Persian Gulf with around 13 trillion cubic feet of natural gas.

Some 23 Iranian hydrocarbon fields lie in border areas and are shared between Iran and adjacent countries, including Kuwait, Iraq, Qatar, Bahrain, the UAE, Saudi Arabia and Turkmenistan.