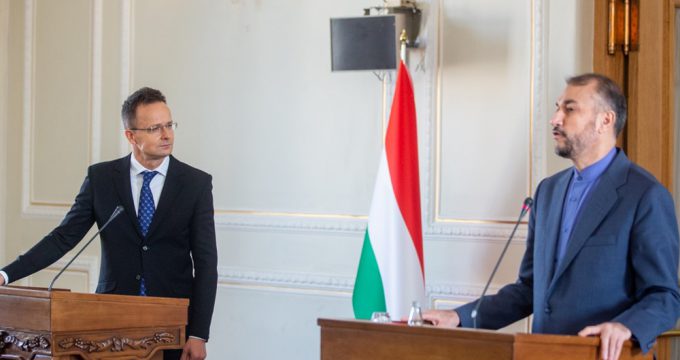 Iran’s foreign minister has called for concerted efforts to reach a political solution to end the ongoing conflict between Russia and Ukraine, reiterating Tehran’s stance of rejecting wars and sanctions.

Hossein Amir-Abdollahian made the remarks in a telephone conversation with his Hungarian counterpart Peter Szijjarto, the Iranian Foreign Ministry reported on Wednesday.

During the conversation, Amir-Abdollahian referred to the war between Russia and Ukraine and the Western-led sanctions on Moscow, saying the Islamic Republic rejects both wars and sanctions.

He also thanked Hungary for its humanitarian role in facilitating the transfer of Iranians living in Ukraine to Iran.

Russian President Vladimir Putin launched a military operation in Ukraine on February 24 to demilitarize and “de-Nazify” the country. In response, the United States and its European allies have been spearheading unprecedented sanctions against Moscow, turning Russia into the most-sanctioned country in the world.

The two foreign ministers also discussed bilateral relations and the latest developments over the Vienna talks on the revival of the Iran deal of 2015.

Amir-Abdollahian offered his congratulations on the victory of the ruling Fidesz party in the Hungarian parliamentary elections.

He said Tehran is ready to expand its relations with Budapest and implement the agreements inked during the two countries’ joint economic commission meeting in December.

Szijjarto, for his part, invited Amir-Abdollahian to visit Hungary.

He underscored his country’s commitment to expanding cooperation with Iran and stressed the need to implement the agreements reached between the two countries.

At the head of an economic delegation, Szijjarto visited Tehran last December, when the two sides signed several cooperation agreements.

Elsewhere, Amir-Abdollahian restated Iran’s determination on reaching a “good and sustainable agreement” through the Vienna talks if “the American side is realistic.”

Pointing to Iran’s initiatives, he said important progress has been made at the talks, but certain issues remain unresolved between Tehran and Washington.

Szijjarto expressed hope that an agreement would be struck through a constructive approach by all sides.

Iran’s constructive approach with the aim of reaching a final deal is very valuable, he added.

Negotiations have been held in the Austrian capital since last April to restore the Joint Comprehensive Plan of Action (JCPOA), commonly known as the Iran deal, which was ditched by former US President Donald Trump in May 2018.

In quitting the agreement, Trump introduced what he called the “maximum pressure” campaign of the “toughest ever sanctions” targeting the Iranian economy in order to bring Iran to its knees.

To withstand the sanctions, Tehran has adopted a “maximum resistance” policy, which includes relying on domestic capabilities and cooperating with neighbors and allies.