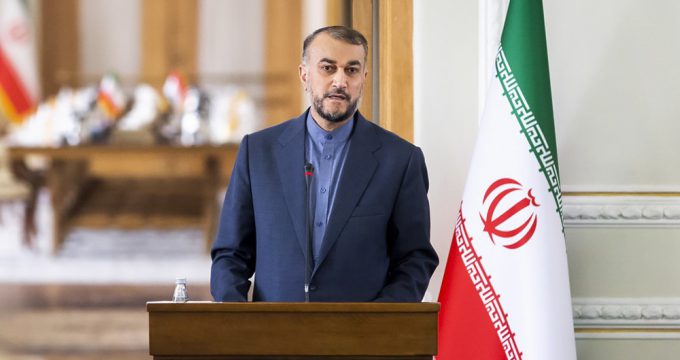 Iran’s foreign minister has blamed the United States for the protraction of the Vienna talks on the revival of the 2015 Iran deal, saying Tehran is ready for a good and sustainable agreement in the Austrian capital.

During a phone conversation with Omani Foreign Minister Badr al-Busaidi on Sunday, Hossein Amir-Abdollahian criticized the US for re-imposing sanctions on Iranian individuals and companies.

He stressed that “The Islamic Republic of Iran is ready for a good and sustainable agreement, but so far the American side, by some of its excessive demands, has been directly responsible for the protraction of the talks.”

Negotiations have been held in the Austrian capital since last April to restore the accord, officially known as the Joint Comprehensive Plan of Action (JCPOA), which was ditched by former US President Donald Trump in May 2018.

In quitting the agreement, Trump introduced what he called the “maximum pressure” campaign to bring Iran to its knees. Tehran maintains that the policy has failed dismally. The Joe Biden administration agrees, yet it has not taken any tangible steps to deliver on its promise of repealing the policy.

The other parties to the talks – Russia, China, France, the UK, and Germany – have also noted that the negotiators are close to finalizing an agreement.

Earlier on Sunday, Amir-Abdollahian told Secretary General of the United Nations Antonio Guterres that the negotiating parties in the Vienna talks are close to reaching a final agreement, adding that the ball is now in US court.

Siege on Yemen must be lifted: Iran FM

During the phone conversation, Amir-Abdollahian and al-Busaidi also discussed bilateral ties and regional and international developments, including a recent truce brokered by the United Nations between the military coalition led by Saudi Arabia, which has been waging a war on Yemen since 2015, and Yemen’s National Salvation Government.

Oman’s top diplomat welcomed the ceasefire and thanked Tehran for its role and efforts in this regard, expressing hope that the truce would pave the way for talks between all Yemeni sides and the reopening of the country’s borders.

The Iranian minister also appreciated Oman’s constructive role in this regard and hoped that the ceasefire would last.

He underlined the importance of the complete lifting of the inhumane siege imposed on Yemen and the need for sending humanitarian assistance to the Yemeni people.

UN special envoy for Yemen Hans Grundberg announced on Friday that the two warring sides had agreed to a ceasefire, which went into effect on Saturday.

Saudi Arabia and a number of its regional allies — particularly the United Arab Emirates (UAE) — launched the brutal war against Yemen in March 2015. The war was meant to eliminate Yemen’s popular Houthi Ansarullah movement and reinstall a former regime.

The conflict, accompanied by the tight siege, has failed to reach its goals, killing hundreds of thousands of Yemeni people. Under the siege, the Saudi-led coalition has been preventing much-needed fuel shipments from reaching Yemen.

According to the UN Office for Humanitarian Coordination (OCHA), more than 23 million, out of 31.9 million people in Yemen, face hunger, disease, and other life-threatening risks as the country’s basic services and economy are collapsing.

In recent months, Riyadh and Abu Dhabi have escalated their airstrikes across Yemen, and in response, have been targeted by the Yemeni forces in several retaliatory drone and missile attacks.