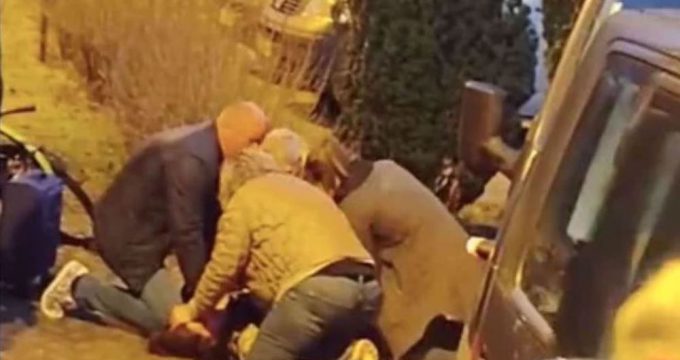 Iran’s embassy in Copenhagen has strongly protested the use of violent force by Denmark’s police against a Kurdish woman, who holds Iranian citizenship, urging the European country to issue an apology.

Denmark forcibly deported the Kurdish woman, Qadamkheir Haqanizadeh, 37, and her two children on Tuesday after their application for asylum was rejected by the Danish government.

Haqanizadeh, a refugee from Kermanshah Province in western Iran, was hit by four plainclothes police and injected drugs. She was dragged out of one of Denmark’s refugee camps in the Hvalso town of the city of Lejre, where she lived for the last seven years.

The woman was violently separated from her husband and her one-year-old child and was taken to Copenhagen Airport with her two 10-year-old children. They were first flown to Istanbul for deportation to Iran, but were returned to Denmark a few hours later due to her resistance and severe bleeding.

In a video which was shared on social media, four people can be seen pinning the woman to the ground, with her head held against the paving stones. She is visibly shaking in the footage. A man in civilian clothing then brings restraints which are used to tie her.

In a Friday meeting with officials of Denmark’s Ministry of Immigration and Integration as well as Foreign Ministry, Iranian Ambassador to Copenhagen Afsaneh Nadipour conveyed Tehran’s strong protest and called on the Danish authorities to apologize for this inhumane behavior and deal with the perpetrators while making sure that similar incidents would not happen.

According to reports, Denmark’s Immigration Minister Mattias Tesfaye was summoned to a parliamentary committee on Thursday to respond to the incident.

Police in Denmark are responsible for carrying out deportations based on the decisions made by immigration authorities.