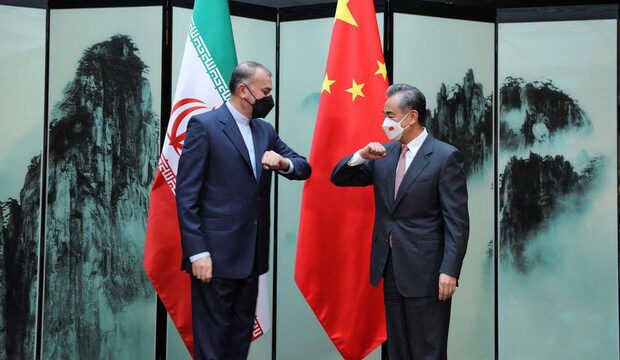 In a meeting with his Iranian counterpart, Chines Foreign Minister Wang Yi said that his country supports Iran in safeguarding its sovereignty and national dignity and defending its lawful rights and interests.

According to the statement, “Wang Yi said, under the strategic guidance of the two heads of state, China-Iran relations have maintained a strong momentum of development. China supports Iran in safeguarding its sovereignty and national dignity and defending its lawful rights and interests and believes that Iran will also firmly support China in safeguarding its core interests. As a comprehensive strategic partner of Iran, China is committed to deepening bilateral cooperation in various fields and is ready to work together to produce more cooperation results for the benefit of the two peoples.

Amir-Abdollahian congratulated China on successfully hosting a series of meetings on the Afghan issue, saying that Iran and China enjoy profound traditional friendship and rich cooperation connotations. The important consensus reached by the two heads of state has injected strong impetus into the development of bilateral relations. No matter how the situation changes, Iran will firmly stay committed to developing Iran-China relations and firmly support China’s just position. Iran is willing to be a reliable energy partner of China by expanding oil and gas cooperation between the two countries, and is ready to strengthen connectivity, tripartite cooperation and educational exchanges with China.

The two sides agreed to strengthen counter-terrorism and security cooperation. Wang Yi stressed that the two sides need to keep a high degree of vigilance against terrorist and extremist forces such as the East Turkestan Islamic Movement taking advantage of the situation in Afghanistan to cause chaos and troubles and take effective measures to safeguard common interests.

The two sides agreed to jointly resist unilateral sanctions. Wang Yi stressed that the United States has been obsessed with unilateral sanctions, which violates the basic norms governing international relations, actually destroys the United States’ credibility, and damages its interests. Sanctions do not serve their purposes, but rather contribute to greater resilience and stronger development of sanctioned countries eventually.

The two sides also exchanged views on the negotiations on resuming compliance with the Joint Comprehensive Plan of Action.”