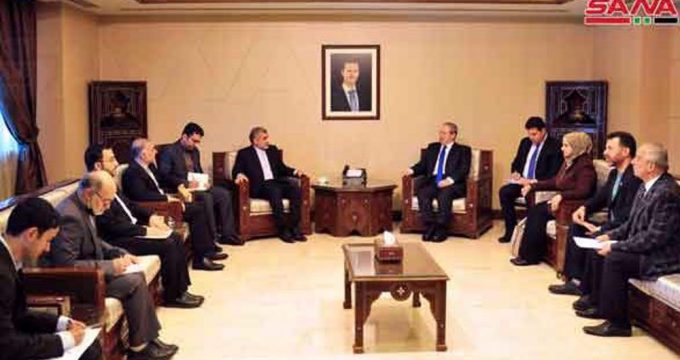 A senior Iranian lawmaker says Iran and Syria are resolved to make serious endeavors aimed at reaching genuine trade and economic partnership, particularly during the reconstruction process of the war-ravaged Arab state.

The lawmaker said he would also hold talks with the speaker of the Syrian People’s Assembly and other senior officials on all issues related to activating economic and parliamentary relations and increasing the volume of trade exchanges.

The Syrian foreign minister, for his part, hailed his country’s “deeply-rooted” relations with Iran in political, economic and parliamentary fields. He said parliamentary relations play an important role in the current juncture.

Mikdad condemned the unilateral sanctions and immoral measures of the US and its Western allies against both the Iranian and Syrian nations.

Speaking at a meeting with Syrian President Bashar al-Assad earlier this month, Iranian Foreign Minister Hossein Amir-Abdollahian said Tehran opposes any war and urges the resolution of disputes between countries through dialog.

Meanwhile, speaking at a press conference following his meeting with the top Syrian diplomat, Nikzad said strategic mutual relations would never unravel as both countries have common positions on international developments.

The Iranian lawmaker affirmed his country’s continuous support for Syria during the reconstruction process.

He said the important role that Iran and Syria played in uprooting terror groups greatly contributed to security in Europe.

Had it not been for the blood of Iranian and Syrian martyrs that led to the defeat of Daesh, a safe Europe would not have existed today, Nikzad said.

He emphasized that Iran opposes the US unilateral sanctions against Syria.