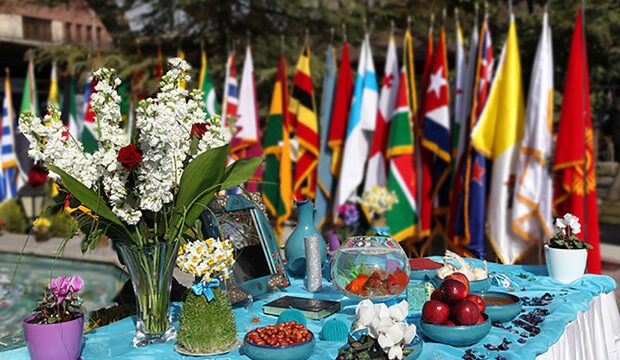 ‘Nowruz diplomacy’ as leverage in foreign policies and the relations of the region’s countries can have extensive contributions and benefits.

Diplomacy is the most important arena in international relations to determine the fate of a country’s war and peace. For this reason, it is obvious that all countries are using every capacity to promote diplomacy and their position in the international system.

Cultural diplomacy is an effective process in which the culture of a nation is presented to the outside world and the unique cultural characteristics of nations are promoted at bilateral and multilateral levels.

The influence of culture in the field of foreign policy is such that in the current era, culture is discussed as a soft power in foreign policy, which is called cultural diplomacy and means the use of cultural tools and mechanisms to introduce and transfer the culture and civilization of land to other lands.

The promotion of national interests through the use of cultural tools may not replace other tools, such as political, economic, and military tools, but it can complement them.

In the meantime, Nowruz with its ancient history of several thousand years in Iran civilization has always been considered. In recent years, the celebration of Nowruz has become more global and some European cities have also recognized it. To understand the importance of Nowruz among different peoples, its geographical scope must be examined.

Celebrated for over 3,000 years in the Balkans, the Black Sea Basin, the Caucasus, Central Asia, the Middle East and other regions, Nowruz promotes values of peace and solidarity between generations and within families as well as reconciliation and neighborliness.

Nowruz marks the New Year and the beginning of spring across a vast geographical area, including, among others, Iran, Azerbaijan, Afghanistan, India, Kazakhstan, Kyrgyzstan, Uzbekistan, Pakistan, Tajikistan, Turkmenistan and Turkey. It is generally celebrated by over 300 million people on March 21, the International Day proclaimed by the United Nations.

Nowruz has good capabilities for the connection and convergence of nations because, in the rituals of Nowruz, there are no examples of polytheism, idolatry, non-divine and inhuman rituals and negative points.

The beautiful rituals of Nowruz, some of which are held on the eve of Nowruz, some during the days of Nowruz and others at the end of Nowruz, are held among a wide range of different people, has special greatness and holiness. It is as if these rituals have the ability to bring together the various nations and tribes that believe in Nowruz and observe it every year.

The cooperation of the countries of the region in registration of Nowruz in the United Nations in recent years shows the importance and high status of this ancient and regional ritual. In the meantime, more attention can be paid to its high capacities in the world and Nowruz functions in the field of world peace development and regional convergence.

Moreover, using Nowruz diplomacy as a lever in foreign policy and relations between the countries of the region can have far-reaching consequences and fruits. In this regard, on the one hand, the cultural cooperation and influence of Nowruz countries in Central Asia, Caucasus and West Asia will expand with more attention and use of the potentials of cultural and Nowruz diplomacies.

On the other hand, in addition to the expansion of cultural convergence, it is possible to increase the political and economic cooperation of the countries in the region by using this diplomacy in regional foreign policy.

With the gathering of leaders and officials of several countries in the region, it is hoped that this joint and institutionalized celebration in the culture of the countries of Central Asia, the Caucasus, West Asia, etc. will become a factor for convergence in the region.

Therefore, the countries participating in the Nowruz celebration can increase their power of influence and communication in the world, and by increasing the degree of convergence between the countries of the region, they can focus on reducing differences and barriers to their cooperation and prevent divergent policies in the region.

In addition to the factor of convergence between nations and cultures, Nowruz can be considered a factor for regional unity and increase cultural ties, as well as preventing hostilities.