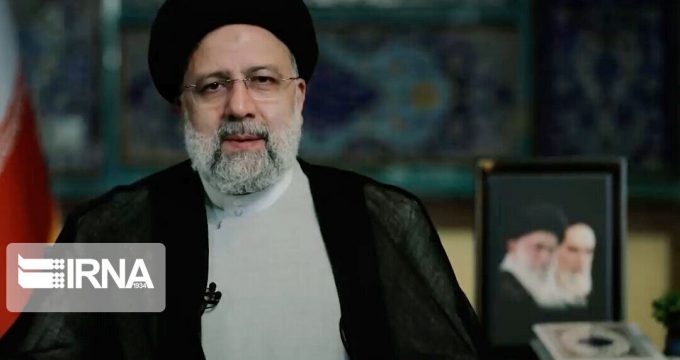 President Ebrahim Raisi said the new century which opens today will be an era for the Islamic Iran.

According to the Iranian government’s official website, the President stated that this year, God willing, employment is our first issue, adding, “Unemployment is the source of all economic and social disasters, and supporting production will be at the top of the government’s plans”.

“No nation has achieved anything without intensive work and the maximum use of human and natural resources, and the new year and the new century must be the beginning of a new round of productive, useful, fruitful and progressive work for all of us,” he said.

I sincerely congratulate you, dear nation of Iran and the Supreme Leader of the Islamic Revolution, on the arrival of Nowruz, the revival of nature and the earth, and the coming of the year 1401.

Nowruz is a symbol and crystallisation of a value-oriented civilisation, the culmination of which is worshipping God, family-friendliness and peace.

A century in which the Muslim people of Iran, led by Imam Khomeini (RA), freed themselves from the domination of arrogance and tyranny and established independence and freedom with the establishment of religious democracy in the sacred system of the Islamic Republic.

Dear hero nation of Iran, “here” is a symbol of your resistance; Khorramshahr Grand Mosque.

During the eight years of the imposed war, the East and the West of the world lined up on a single front against Iran’s independence, but today they are competing to interact with Iran. This is the greatness of the great nation of Iran.

The Iranian nation passed through difficult historical milestones with pride and preservation of independence. Of course, it is still not unaware of the enemy’s wile.

All Iranian ethnic groups, including Persians, Lors, Kurds, Azeris, Baluchis, Arabs and Turkmen, all serve this national cause. We are all one family, with a common destiny, the Iranian family.

In the seven months since taking office, the government has shown that it is determined to do what it says.

We said that we will control coronavirus with the help of God and the help of the people; praise be to God, it happened. We said that we would not let the country and the economy sit idle for the Joint Comprehensive Plan of Action (JCPOA), everyone saw that while negotiating and using political and legal tools to eliminate the sanctions, we focused on neutralising the sanctions.

Everyone saw from the first months how we activated the suspended capacities, thanks to God Almighty and the people. Fortunately, signs of economic growth and stability and a significant increase in the value of foreign trade and non-oil exports have emerged during this period. We increased trade with our neighbours for the benefit of the people.

We said that the main goal of the government is to curb inflation and implement inflation-eliminating policies. With God’s help, this movement began and today the slope of inflation in the last quarter of the year decreased. Statistics prove this claim.

We said that we will drive the production wheel powerfully. Official statistics, which are still up to the end of the third quarter, show that economic growth has reached above 5%.

We said that we will use all the capacities of the country to accelerate the progress and development of the country. Everyone witnessed how the path was cleared for public and revolutionary institutions to provide services to the people, and we all went to work together. Today, all the institutions of the Islamic Revolution stand side by side with the government, and all stand by the people.

Contrary to the times when the officials constantly defaming each other at the tribunes and worried the people, with the cooperation and coordination of the three branches and all institutions, an attempt was made to transfer the disagreements into expert meetings and inject the spirit of hope and convergence to the official tribunes to resolve the country’s problems.

We said that we do not trade the interests and security of the people for anything. Everyone saw that we prioritised increasing the country’s defence, missile and space capabilities, because the country’s security is a priority.

We hope that our government will be a sincere government in fulfilling its promises and keeps the promises made in due time.

Your government, with active diplomacy, has restored balance to foreign policy. The country’s greatest achievement in recent years has been the scandalous failure of the Americans’ policy of maximum pressure, which was made possible by the resistance of the Iranian people.

Dear and noble people of Iran,

We started running the country in the right direction. We did not seek the fate of the nation in the hands of outsiders. We put aside dualism and distancing, which undermines the power of the nation. We have shown that the power in the field is in favour of the power of diplomacy. Diplomacy can serve health. We used foreign relations in the service of society’s economy, and that is the meaning of a transformational and justice-oriented government.

I am directly aware of your sufferings and I have touched it on provincial trips and in public meetings with the people.

In the 7 months of the government’s office, many efforts have been made to improve the living conditions of the people and control inflation, and we have also paid special attention to the poor, and God willing, we will continue to do so.

Since the government’s term of office, many closed and semi-closed workshops returned to production.

This year, God willing, employment is our first issue. Unemployment is the source of all economic and social disasters, and supporting production will be at the top of the government’s plans.

During this period, many programmes have been pursued in launching large-scale national projects and regional projects.

In the field of housing production, curbing inflation and creating jobs, measures have been taken, the results of which will soon be seen in the country.

With God’s help and without a doubt, this year the Iranian nation will see the result of their perseverance and endurance. As in the past, the results of their endurance and resistance have been proved.

I hope the new year is the year of the end of coronavirus around the world and the end of war and displacement in all countries of the world.

My first Nowruz message as the President and people’s servant is the relentless effort for building a strong and advanced Iran. No nation has achieved anything without intensive work and the maximum use of human and natural resources, and the new year and the new century must be the beginning of a new round of productive, useful, fruitful and progressive work for all of us.

I cherish the memory of all the warriors, martyrs and veterans who strived for the glory of Islam and dear Iran in the last century, and at the head of them, our great Imam, who is undoubtedly the shining sun of the 14th century.

Once again, I congratulate you dear ones on Nowruz and the beginning of the new year, and I wish you all success, health, happiness and victory in the new year.