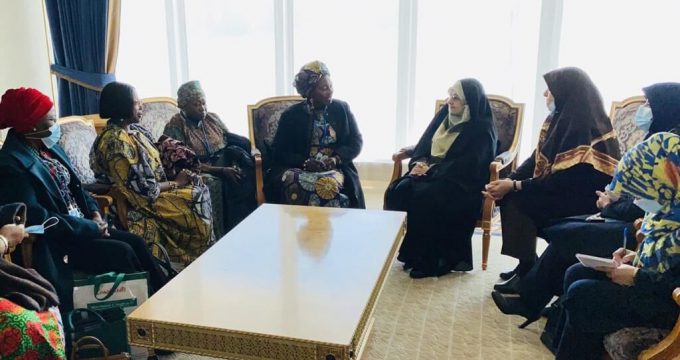 Iran’s Vice-President for Women and Family Affairs Ensieh Khazali held talks with Nigerian Minister for Women Affairs Minister and Social Development Dame Pauline Talle on the sidelines of the sixty-sixth session of the Commission on the Status of Women in New York.

During the Thursday meeting, the Iranian VP for women and family affairs referred some achievements of the Islamic Republic in preserving women’s rights and supporting family foundation, including the improve of health situation, life expectancy, insurances for rural and female heads of households, women’s participation in acquiring academic positions as well as decline of illiteracy throughout the country.
She further pointed to a plan for supporting families and home businesses, noting that such opportunities have helped women throughout Iran to learn skills and find jobs.
The Iranian vice-president for women and family affairs also called for exchange of experiences between Nigeria and Iran in respect of education and preventing from children dropping out of school.
The Nigerian minister, for her part, pointed to the situation of education, illiteracy and children dropping out of school in her country, adding that the African state is trying to provide women with loans and credit facilities to empower them.
Referring to the incumbent president’s willingness to allocate 35 percent of political positions to women in Nigeria, Dame Pauline Talle noted that the country has paved the way for providing female politicians with up to 30 percent of parliament seats in the future.
She also said that the current presence of women in different positions is low and about 8 percent.
It is worth mentioning that Nigerian parliament speaker’s wife was present in the meeting between Iranian vice-president for women and family affairs and Nigerian minister for women affairs minister and social development.

66th session of the Commission on the Status of Women in New York, Iran’s Vice-President for Women and Family Affairs Ensieh Khazali March 18, 2022
Tehran committed to promotion of human rights in world
Dragan Skocic Invites 28 Players for World Cup Qualifiers