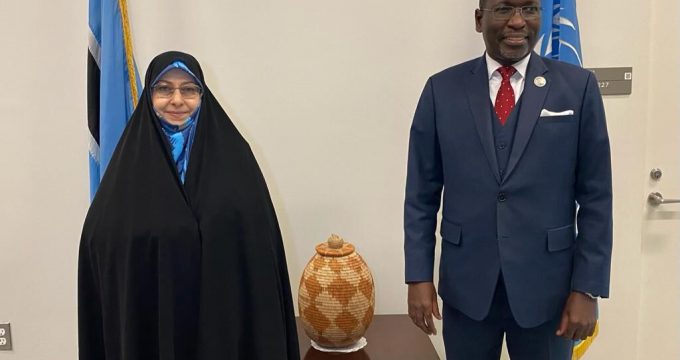 The United States’ unilateral sanctions on Iran has created difficulties in the way of implementing several programs regarding health and medicine field, an Iranian official said.

Iran’s Vice-President for Women and Family Affairs Ensieh Khazali made the remarks on the sidelines of the sixty-sixth session of the Commission on the Status of Women during her meeting with President of the Economic and Social Council (ECOSOC) Collen V. Kelapile in New York.
The Economic and Social Council (ECOSOC), under the overall authority of the General Assembly, coordinates the economic and social work of the United Nations and the UN family of organizations.
The Iranian vice president congratulated Kelapile for his appointment as the new head of ECOSOC, noting that the Islamic Republic of Iran is the coordinator of the Indian Ocean Rim Association (IORA) for women’s economic empowerment; so, there is a good opportunity to pave the way for cooperation between ECOSOC and Tehran in terms of empowering women.
The Islamic Republic is ready to provide other nations throughout the world with educations and trainings in accordance with its own experiences in different job fields as well as agriculture and information technology, Khazali said.
The Iranian official also pointed to difficulties created following the spread of COVID-19 disease, noting that illegal and unilateral sanctions imposed by the US on Iran have made hard implementation of many projects related to health and medicine sector.
As to the compliance with the 2015 nuclear deal, she argued that the Islamic Republic has shown commitment under the Joint Comprehensive Plan of Action (JCPOA), but the other side (the US and its European allies) did not abide by their obligations under the deal.
The chairman of ECOSOC expressed satisfaction with Khazali’s suggestion for cooperation in empowerment of women, emphasizing on the significance of the Commission on the Status of Women as a subsidiary of the ECOSOC.
According to Kelapile, the ECOSOC provides countries with advices on empowerment of women, and member states can partake in regional sessions of the Commission on the Status of Women.
The ECOSOC president further noted that he remembers which party did no complied with its commitments under the JCPOA, and that he believes the issue of sanctions should be divided from other topics in negotiations.
After two years pause due to the coronavirus pandemic and lockdown, the 66th session of the Commission on the Status of Women takes place from 14 to 25 March 2022.
Achieving gender equality and the empowerment of all women and girls in the context of climate change, environmental and disaster risk reduction policies and programs are among prioritized themes of this year’s session.
Representatives of member states, UN entities, and ECOSOC-accredited non-governmental organizations (NGOs) from all regions of the world have been invited to contribute to the session.