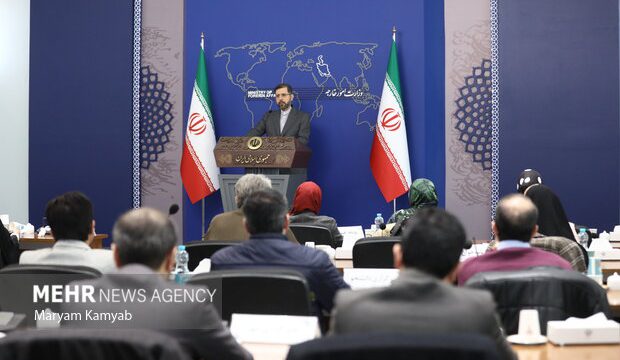 Iran says it will strongly protect its national interests and independence and will never allow any country to interfere in its domestic affairs.

“We are strong enough and we will not give up any effort to protect the country’s national interests, independence and [territorial] integrity,” Iranian Foreign Ministry Spokesman Saeed Khatibzadeh said on Saturday.

“On the other hand, we will not allow any country to exploit or interfere [in the country’s affairs],” he added.

Referring to Iran’s fierce resistance in the face of the West’s plots, the Iranian spokesperson emphasized that the country’s foreign policy “is based on resistance and resilience and we, in the diplomatic apparatus, do not allow anyone to decide for us.”

Khatibzadeh emphasized that the Islamic Republic has managed to gain power over recent years by relying on its scientific capabilities.

Elsewhere in his remarks, Khatibzadeh said Iran pursues an “independent” stance on the ongoing conflict between Ukraine and Russia, now on its 17th day, reiterating Tehran’s opposition to war.

Iran’s policy on the Ukrainian crisis “is independent and based on its foreign policy because we oppose war and the US and NATO’s devouring of the world,” the spokesman added.

Since the dissolution of the Soviet Union, he noted, the international system has been undergoing changes and the ground for the current conflict between Russia and Ukraine has been prepared since three decades ago.

Russian President Vladimir Putin announced a “special military operation” in Ukraine on February 24. The conflict has provoked a unanimous response from Western countries, which have imposed a long list of sanctions on Moscow.

Russia says it will halt the military operation instantly if Kyiv meets Moscow’s list of conditions, including that Ukraine never attempts to join NATO.

The military conflict has so far displaced more than two million people in what the United Nations has described as the fastest growing refugee crisis in Europe since World War II.

Iranian Foreign Minister Hossein Amir-Abdollahian on Friday reiterated Tehran’s stance on the need to settle the ongoing crisis in Ukraine through political channels, saying the Islamic Republic is ready to dispatch humanitarian aid to refugees.”Based on the foreign policy principles of the Islamic Republic of Iran and away from any double standards, we do not see war as a solution neither in Ukraine, nor in Yemen, Afghanistan and elsewhere in the world,” Amir-Abdollahian said.