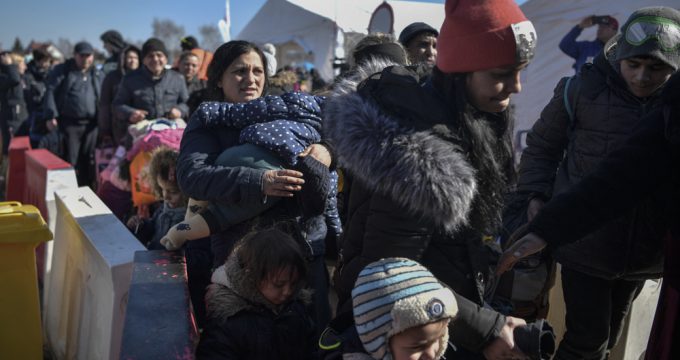 Iranian Foreign Minister Hossein Amir-Abdollahian has reiterated Tehran’s stance on the need to settle the ongoing crisis in Ukraine through political channels, saying the Islamic Republic is ready to dispatch humanitarian aid to refugees.

“Based on the foreign policy principles of the Islamic Republic of Iran and away from any double standards, we do not see war as a solution neither in Ukraine, nor in Yemen, Afghanistan and anywhere in the world,” Amir-Abdollahian said in a phone call with Poland’s Foreign Minister Zbigniew Rau.

He added that the Iranian Red Crescent Society (IRCS) has sent a plane carrying humanitarian aid to refugees in Ukraine in cooperation with the International Committee of the Red Cross (ICRC).

The foreign minister noted that the Iranian relief teams are ready to cooperate with the ICRC and provide humanitarian assistance to Ukrainian refugees in Poland.

Amir-Abdollahian hailed efforts made by the Polish government to help the Ukrainian refugees and also to repatriate Iranian nationals living in the crisis-hit areas.

Russian President Vladimir Putin announced a “special military operation” in Ukraine on February 24. The conflict has provoked a unanimous response from Western countries, which have imposed a long list of sanctions on Moscow.

Russia says it will halt the military operation instantly if Kyiv meets Moscow’s list of conditions, including that Ukraine never attempts to join NATO.

The military conflict has so far displaced more than two million people in what the United Nations has described as the fastest growing refugee crisis in Europe since World War II.

The Polish foreign minister, for his part, stressed the importance of establishing a humanitarian corridor for the evacuation of women and children as well as the provision of food and medical assistance to the Ukrainian refugees.

Rau added that some 1.5 Ukrainian refuges have so far fled their country to Poland while the number is likely to reach five million, emphasizing that it would be vital to provide Ukraine’s neighbors with international support.

He also noted that 1,400 Iranian nationals have so far entered Poland from Ukraine and welcomed the dispatch of a rescue team from Iran to Poland to help the refugees.

The top Iranian and Polish diplomats also discussed bilateral relations and regional and international developments as well as talks between Iran and the P4+1 group of countries in the Austrian capital of Vienna.