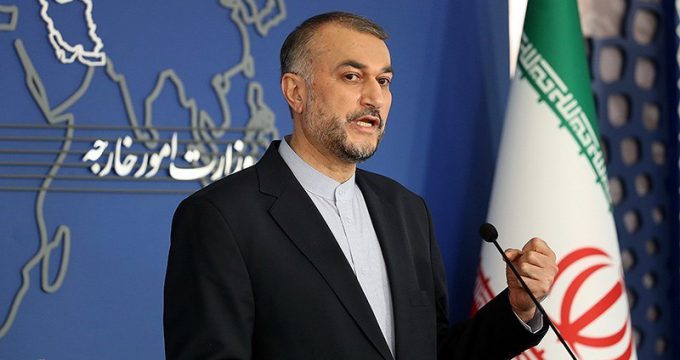 Iran’s Minister of Foreign Affairs Hossein Amirabdollahian has underscored that conclusion of the Vienna talks cannot be decided based on a unilateral approach.

Amirabdollahian described his Thursday discussion with Josep Borrell, High Representative of the European Union for Foreign Affairs and Security Policy, as positive and constructive, stressing that the final decision on the talks in Vienna, Austria, to revive the 2015 nuclear deal and lift anti-Iran sanctions will be taken on the basis of collective consensus.
The Iranian top diplomat wrote on his Twitter account on Friday: “Had a productive conversation w @JosepBorrellF today.”
Pointing to endeavors made in eight rounds of the Joint Commission meetings of the Joint Comprehensive Plan of Action (JCPOA), the Iranian FM tweeted: “Efforts to reach a good & durable agreement continue; it is within reach if US acts realistically & consistently.”
However, he warned: “No single party can determine end result; a joint endeavor is needed.”
Amirabdollahian went on to stipulating that all sides should take reasonable stance to pave the way for reaching an acceptable agreement in Vienna, tweeting: “Reason should prevail.”
The eighth round of the Joint Commission meetings of the Joint Comprehensive Plan of Action (JCPOA) kicked off on December 27, 2021.
Representatives from Iran, the European Union and the P4+1 group of countries, including Britain, France, Russia, China plus Germany made efforts to finalize a draft text for a potential Vienna agreement and they are trying to take decisions on certain outstanding issues.
Despite some attempts made by certain players such as the Zionist regime to sabotage the Vienna talks, the negotiations have been moving forward as most participants in the talks mentioned; although, there are still some remaining issues to be solved to pave the way for reaching a final deal.
The Islamic Republic has repeatedly underlined that it will continue to insist on respecting its redlines and rights during the Vienna talks.

JCPOA, Vienna talks March 11, 2022
US not interested in strong deal in Vienna talks: Iran’s security chief
Ayatollah Khamenei: Retreating in the face of the US big mistake