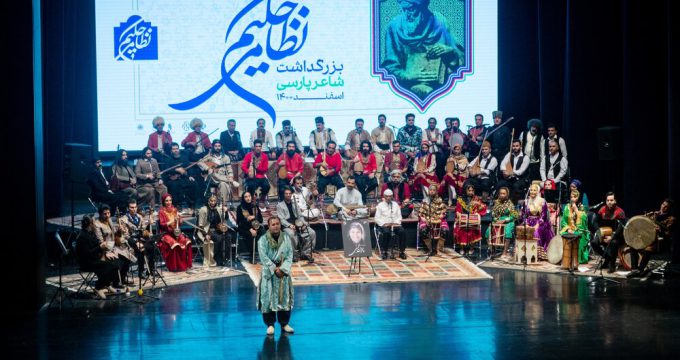 Formerly known as Sazineh Ensemble, the orchestra has been active since 2017. Seven regional music experts are collaborating with the orchestra featuring 45 players and ten singers who are working under the supervision of Payman Bozorgnia.

“The orchestra is composed of outstanding performers from the country’s regional music,” Bozorgnia said on stage before the beginning of the concert.

“By this concert, we intend to take you on a journey to the heart of Iran’s regional music, introducing parts of the country’s folk music,” he added.

In his short speech, Iran House of Music managing director Hamidreza Nurbakhsh, who was in attendance at the performance, said, “Due to the dispersion of regional musicians across the country, it’s difficult to form a regional music orchestra.”

He added, “Our music is rooted in the country’s regional music and it’s our duty to pave the ground for them to represent their art.”

“There has been no replacement for those regional musicians who have passed away over the past few decades; most of them were real gems who garnered the acclaims of the audience and critics in international performances,” he noted.

“Unfortunately however, no plan has yet been implemented in the country for supporting them so as to enable them to continue and maintain their art for future generations,” he lamented.

Nurbakhsh warned the cultural officials about the issue.

“Due to limited facilities, Sazineh has always given its performances under difficult conditions,” he said and added, “For this concert, the orchestra had only three or four days to rehearse, however, their performances have always been amazing.”

“This orchestra must be strongly supported so that similar groups from across the country can emerge,” he stated.

Nurbakhsh said that the establishment of a variety of regional music groups can help improve tastes in music in the country.

The concert was a prelude to a massive program Iran plans to organize next week to commemorate Persian poet Nezami Ganjavi, who brought a colloquial and realistic style to the Persian epic.