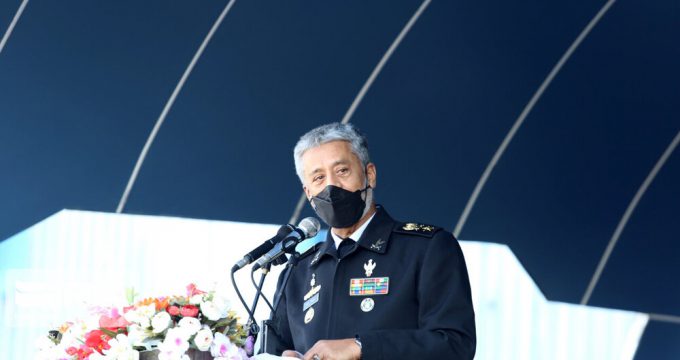 Rear Admiral Habibollah Sayyari, the deputy army chief for coordination affairs, has said that the Iranian military is closely monitoring all wars across the world.

“For preparation and in order not be caught unguarded we should always keep in pace with the modern day’s technologies. The Supreme Leader as the commander in chief of the armed forces has said that when a war happens in the world you (armed forces) should stay near the mat like a spectator and assess different techniques that they use against each other and then see how we can make ourselves stronger against them. Therefore, we monitor all wars or armed conflicts that happen across the world,” Sayyari said on the sidelines of a fair showcasing technological and scientific advances in defense field.

He added, “We should rely on our domestic capabilities and make progress and become stronger in comparison to the day before. And according to the needs of the day and future, train our forces and make use of existing potentials of the country.”

Sayyari also pointed to the duties of the army, saying, “The mission of the Army of the Islamic Republic of Iran is to protect territorial integrity, independence and Islamic system. For doing this mission, the army should undoubtedly be prepared in every aspect and make use of previous experiences in a proper way.”

He added, “Fortunately, we have reached a stage that when we look back and see our achievements, we enjoy it.”

Iran has made breakthroughs in defense technology. Iran embarked on developing its defense capability by using the experience of Saddam Hussein’s invasion of Iran in September 1980. In those years Saddam showered bombarded Iranian cities and showered missiles on residential areas.

The fighter jets and missile Saddam’s regime was using against Iran was mostly provided by the Soviet Union and certain Western countries, including France.

In the 1980s, the Western countries refused to give Iran missiles to defend itself.

The West went further by providing materials to the Saddam regime to build chemical weapons and use them against Iran.

Hossein Askari, a professor emeritus from the George Washington University, says, “Before and after Saddam Hussein invaded Iran, the U.S. did little to dissuade him and might in fact have encouraged him.”

Askari also says, “The United Nations was not active in condemning this most serious of transgressions under the UN charter.”

The professor says while the West and Russia sold arms to Saddam, they imposed arms embargo against Iran.

“The U.S. and its European allies, along with Russia, supplied Saddam Hussein with all the weaponry he needed while putting an arms embargo on Iran. The U.S. provided Iraq with military intelligence. Iran, however, managed to overcome its many handicaps.”

The professor adds while Iran was driving out Saddam’s soldiers from its occupied lands, the Europeans, with a green light by the U.S., provided Saddam with chemical arms.

“As Iran was expelling the Iraqi invaders and threatening Iraq, the Europeans, with U.S. complicity, supplied Saddam Hussein with internationally banned chemical weapons. This was the most egregious use of chemical weapons since the Holocaust,” the professor laments.

In a report on September 23, 2020, France 24 said, “Saddam Hussein invaded Iran, launching a war that raged for eight years. The late Iraqi dictator also unleashed chemical weapons on Iran. This conflict is considered one of the deadliest in modern history. Today, the survivors of those poison gas attacks still struggle with mental and physical health problems. However, the residents of the Iranian town of Sardasht have not given up their fight for international recognition of the horrific massacre.”