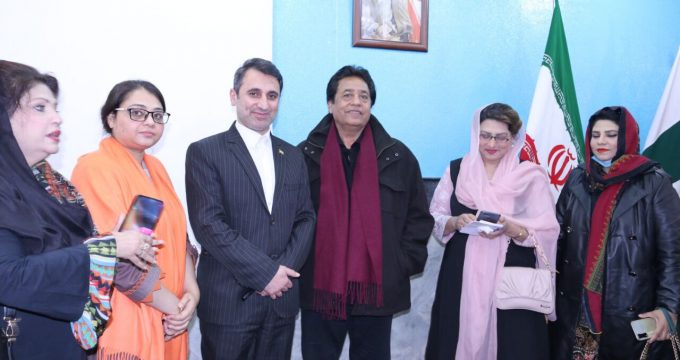 An Iranian Film Festival has opened in Pakistan eastern city of Lahore to mark the 43rd anniversary of the victory of the Islamic Revolution with the presence of prominent artistic, cultural and political figures of Pakistan and Iranians living in the city.

Morteza Frati, Deputy Consul General of the Islamic Republic of Iran in Lahore, diplomats and their family members also attended the glorious celebration of the anniversary of the victory of the glorious Islamic Revolution and the Iranian Film Festival.

Jafar Ronas, Director Iran’s Culture Center said 43 years ago, the Iranian nation, led by Imam Khomeini, established a religious democracy for the first time in the world with the overthrow of the imperial regime.

Referring to the role of the Shah’s regime as a protector of Western interests in the region, he said the Islamic Revolution of Iran brought a profound transformation in Iranian society.

Ronas said cinema holds important position in Iran and for three days we will show five prominent Iranian films with the purpose to acquaint Pakistani citizens with the taste of Iranian films.

He added Iranian films, due to their unique approach and view of society got an international recognition and won dozens of international awards at international festivals over the past decades and years.

Congratulating the 43rd anniversary of the victory of the Islamic Revolution to the Supreme Leader and the people of Iran, Mubashir Luqman, a well-known Pakistani presenter and senior analyst, said when the Islamic Revolution led by Imam Khomeini achieved success, many people thought that this revolution will not last and in this regard eight-year war was imposed on this country, but despite all conspiracies Islamic Revolution is flourishing for past four decades.

He said the brave leaders of the Islamic Republic of Iran are the main factor in the stability of the revolution.

Renowned Pakistani film director, Sayyed Noor in his views said Iranian cinema holds an important place in the world and we always like Iranian films.

On the sidelines of the festival, an exhibition of Iranian culture, handicrafts, and women’s clothing and hijab was also displayed, which was well received by visitors.

Many Pakistani news channels and representatives of the Lahore-based print media also covered the opening ceremony of the Iran Film Festival and the commemoration of the anniversary of the victory of the Islamic Revolution.