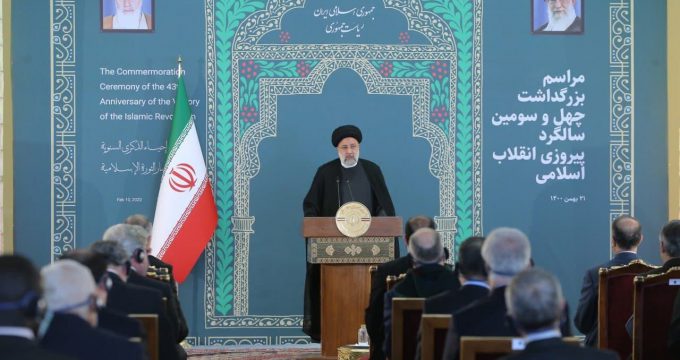 Iranian President Ebrahim Raisi said on Thursday that Iran’s approach to the world countries, neighbors in particular, is not tactical, but it is a strategic issue.

President Raisi made the remarks during a ceremony to commemorate the 43rd victory anniversary of a 1979 Islamic Revolution where Tehran-based foreign ambassadors and the representatives of international organizations in Tehran were also present.

Raisi said that since he took office last August, the foreign policy of his administration has been based on the values and principles enshrined in the Iranian Constitutional Law with reliance on the guidelines of Supreme Leader of the Islamic Revolution Ayatollah Seyyed Ali Khamenei.

Islamic Republic of Iran has always insisted on boosting good neighborliness and creating trust and dialogue among neighbors, the president said, underlining that sustainable security and creating a safer and more developed region is only possible through cooperation, peace, and further partnership of all the countries.

He expressed hope that cooperation with neighbors will serve the mutual interests of all the regional states.

President Raisi said that the clear message of Islamic Revolution is denial of domination and being dominated and accusing the intervention of world powers in domestic affairs of sovereign states.

Underlining the Iranian government’s efforts to begin a new chapter of bilateral and multilateral cooperation to ensure peace and stability in the region and globally, Raisi referred to a 25-year comprehensive agreement with China and plans for signing another agreement with Russia.

The president also said that Iran has strengthened cooperation with Eurasia Economic Union (EAEU) and has been granted full membership of Shanghai Cooperation Organization.

He however said that Iran is also due to increase cooperation with other world regions, including, Africa, Latin America and Europe.

Unique investment opportunities, a suitable domestic market, a privileged geographical position along with sustainable security inside the country, have created suitable conditions in Iran for transit connections with other countries, crossing of energy lines and improvement of trade, the president said.