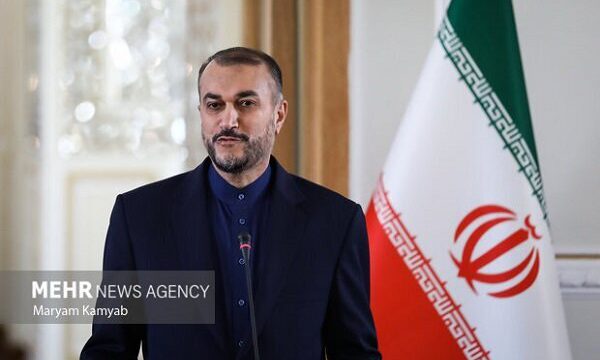 Iran’s Foreign Minister Hossein Amir-Abdollahian says the ongoing talks in the Austrian capital on the revival of the landmark 2015 deal will come to an end when the West shows determination to remove all sanctions imposed against Tehran.

Amir-Abdollahian made the remarks in a Thursday address to a group of foreign ambassadors to the Islamic Republic on the occasion of the 43rd anniversary of Iran’s Islamic Revolution.

“Today in Vienna, the United States and the Western parties [to the Iran deal, known as the Joint Comprehensive Plan of Action (JCPOA)] are faced with a litmus test in which they must show their real behavior to the world,” Iran’s top diplomat said.

“We have attended the [Vienna] talks with seriousness, a [clear] plan and initiative [and] are determined to reach a good agreement.”

“The termination of the negotiations will be determined by the Western side’s resolve to remain fully committed to removal of sanctions and return of all sides to [full compliance with] their commitments,” Iran’s foreign minister said.

Amir-Abdollahian said the Islamic Republic pursues the development of bilateral relations with other countries on the basis of common and equal interests, noting that the Iranian administration attaches special importance to developing regional and international cooperation.

Pointing to the Vienna talks on the removal of anti-Iran sanctions, Amir-Abdollahian said, “Today, on the anniversary of the victory of the Islamic Revolution, our colleagues in Vienna are negotiating the lifting of brutal sanctions, and the Iranian nation has historically shown that it responds to dignity with dignity and threat with resistance, resilience and corresponding language.”

Addressing the same event, President Ebrahim Raeisi said on Thursday that Iran’s approach in relations with world countries, especially neighbors, is not based on tactical but strategic considerations.

Raeisi said his administration’s foreign policy is based on the principles and values enshrined in the Iranian Constitution and the guidelines of Leader of the Islamic Revolution Ayatollah Seyyed Ali Khamenei.

The Iranian president drew an analogy between the current and the former US governments, saying the administration of US President Joe Biden is no different from its predecessor in its policies and actions.

Former US President Donald Trump unilaterally left the JCPOA in May 2018 and re-imposed the anti-Iran sanctions that the deal had lifted. He also placed additional sanctions on Iran under pretexts irrelevant to the nuclear case as part of his “maximum pressure” campaign.

In May 2019, following a year of strategic patience, Iran decided to let go of some of the restrictions on its nuclear energy program, resorting to its legal rights under the JCPOA, which grants a party the right to suspend its contractual commitments in case of a non-performance by the other side.

The Biden administration says it is willing to compensate for Trump’s mistake and rejoin the deal, but it has retained the sanctions as leverage.

Envoys from Iran and the P4+1 group of countries — Britain, France, Russia, and China plus Germany — have been holding negotiations in the Austrian capital for 10 months in a bid to resurrect the JCPOA. The eighth round of the talks resumed on February 8 after a short pause over the diplomats’ return to their capitals for consultations.