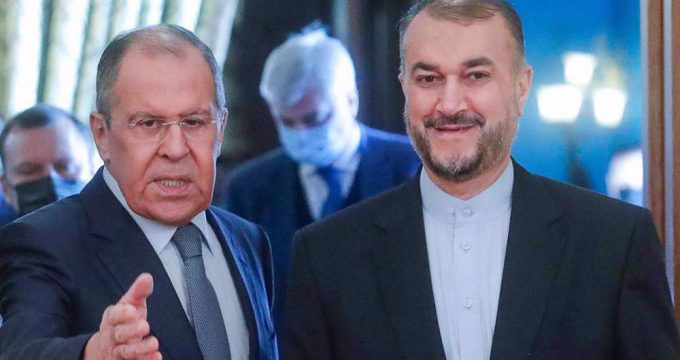 Foreign Minister Hossein Amir-Abdollahian has reiterated Iran’s readiness to reach a good deal in Vienna talks, stressing, however, that there will be no swift progress in the negotiations unless the Western side adopts a realistic approach.

In a telephone conversation with his Russian counterpart Sergei Lavrov on Tuesday, Amir-Abdollahian described Moscow’s position on Tehran’s nuclear issue as constructive.

“The Islamic Republic is resolutely seeking a good agreement within the framework of its interests and rights,” the top Iranian diplomat said.

“Iran stands ready to reach such an agreement as soon as possible, but without the Western side’s realism and its tangible and real measures, no swift progress will be achieved in the negotiations.”

He said an effective removal of sanctions is a very important sue and that Iran will continue its consultations and contacts with Russia and other parties in this regard.

Amir-Abdollahian added that the agreements reached between Russian President Vladimir Putin and his Iranian counterpart, Ebrahim Raeisi, during the latter’s visit to Moscow have been put on the agenda of relevant Iranian institutions for follow-up.

Lavrov, for his part, underlined the importance of reviving the 2015 nuclear deal, officially called the Joint Comprehensive Plan of Action (JCPOA), and lifting the illegal sanctions.

All parties to the JCPOA, and in the first place the United States, must return to their commitments, he said, noting that Moscow has always stressed the need to stop destructive measures against the accord and understands Tehran’s concerns.

Lavrov also welcomed the Iranian side’s stance on the need to increase the speed of the Vienna talks and make them result-oriented.

Russia, he asserted, is fully committed to honoring its obligations in bilateral relations with Iran, and calls for enhanced cooperation between the two countries in various areas.

Earlier on Tuesday, envoys from Iran and the P4+1 group of countries resumed negotiations in the Austrian capital aimed at lifting sanctions and resurrecting the JCPOA.

A source close to the Iranian negotiating team told Tasnim News Agency that Iran has made its political decision.

“The main obstacle is the lack of political decision-making by the United States. Washington should be concerned about missing the opportunity,” the source said.

The eighth round of the Vienna talks was paused over a week ago to allow delegations to head back to their capitals for political consultations.

Iranian officials have repeatedly said the onus falls on the United States to remove all illegal sanctions against the Islamic Republic in a verifiable manner and guarantee that a new US administration would not breach the JCPOA once again.

Former US president Donald Trump unilaterally left the JCPOA in May 2018 and re-imposed the anti-Iran sanctions that the deal had lifted. He also placed additional sanctions on Iran under other pretexts not related to the nuclear case as part of his “maximum pressure” campaign.

In May 2019, following a year of strategic patience, Iran decided to let go of some of the restrictions on its nuclear energy program, resorting to its legal rights under the JCPOA, which grants a party the right to suspend its contractual commitments in case of non-compliance by the other side.

The US administration of President Joe Biden says it is willing to compensate for Trump’s mistake and rejoin the deal, but it has retained the sanctions as leverage.