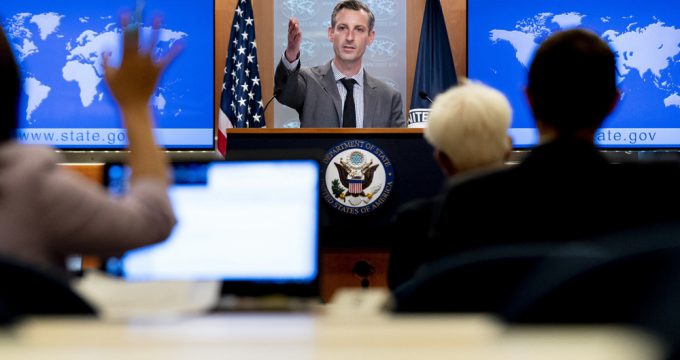 The United States has officially called its withdrawal from the Iran agreement a “foolish decision” that was taken under the former administration of Donald Trump in 2018, but sticks to its narrative that it is Iran that needs to make decisions to revive the deal.

Speaking at a press briefing on Monday, US State Department spokesman Ned Price defended the recent restoration of the so-called “civ-nuke” sanctions waivers, saying the waiver “in no way enriches Iran.”

“The Trump administration, as you know, provided a similar waiver for years even after its foolish decision to leave the JCPOA, precisely because the last administration recognized the non-proliferation value of these waivers,” Price said.

On Friday, US Secretary of State Antony Blinken restored the sanctions waivers, which are related to the agreement, officially called the Joint Comprehensive Plan of Action (JCPOA).

The waivers were ended during the Trump administration as part of the former US president’s anti-Iran “maximum pressure” campaign, which he launched in 2018 after withdrawing from the JCPOA.

In response to the restoration of waivers, Iran said a “show” of removing the sanctions is “not considered constructive” as negotiations continue in Austria’s capital, Vienna.

The talks were launched in April last year, a few months after Joe Biden assumed office, with the aim of bringing the US back into the deal by removing its sanctions against Iran.

The Biden administration has repeatedly criticized Trump’s maximum pressure policy against Tehran without taking meaningful measures to end it.

Price said the Vienna talks could go one of two ways, including “a mutual return to compliance if Iran is in a position and willing and able to make the sort of political commitments necessary; or the alternatives that we’ve talked about in some less … detail but that we still talked about.”

Earlier in the day, Iranian Foreign Ministry spokesman Saeed Khatibzadeh reiterated Iran’s latest position that a deal can be reached immediately if the US and other JCPOA signatories provide guarantees that they will honor the deal.

“In recent weeks, Iran has done what it had to do, and much depends on the decisions of the other side,” Khatibzadeh said.

He also dismissed the restoration of waivers as something “not worth paying serious attention to,” advising the US delegation to return to Vienna with a “clear agenda” and after taking the necessary “political decisions” to restore the JCPOA.

The Vienna talks are expected to resume on Tuesday after a short break, during which the negotiators had returned to their respective capitals for further consultations.