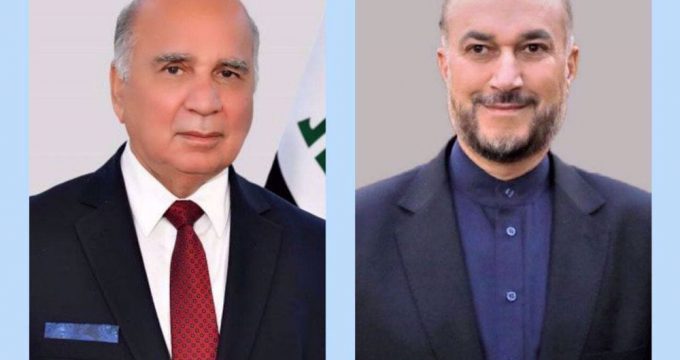 The foreign ministers of Iran and Iraq have talked on the phone, stressing the need to put a rapid end to the ongoing devastating war in Yemen.

During their conversation on Thursday, Hossein Amir-Abdollahian and his Iraqi counterpart, Fuad Hussein, discussed bilateral relations as well as major regional and international issues of mutual interest.

Iran’s official news agency IRNA said the two diplomats discussed and exchanged views on developments in the region, including Yemen.

The top diplomats of Iran and Iraq underlined the need to make effective efforts to end the ongoing Saudi-led war on the impoverished  Yemen, the persistence of which, as they said, would lead to insecurity and instability throughout the region.

Saudi Arabia launched the war on Yemen in March 2015 with the participation of the United Arab Emirates and other countries and extensive military support of the United States and the Europeans.

The war has left hundreds of thousands of Yemenis dead and displaced millions more. It has also destroyed Yemen’s infrastructure and spread famine and infectious diseases there.

Despite Saudi Arabia’s incessant bombardment of the impoverished country, the Yemeni armed forces have gradually grown stronger, leaving Riyadh and its allies bogged down in the country.

The Iraqi foreign minister, for his part, discussed the Vienna talks during the phone call on Thursday, stressing the importance of continuing Tehran-Riyadh talks and its positive effects on deepening and consolidating stability and security in the entire region.

For years, the kingdom pursued a confrontational foreign policy toward the Islamic Republic, but it recently appeared to have changed track.

The two Middle East heavyweights have held four rounds of talks since April, including a meeting in December with the administration of new President Ebrahim Raeisi.

Amir-Abdollahian and Hussein underscored the continuation of consultations and consensus between Iran and Iraq in order to advance the interests of the two countries and all regional states.