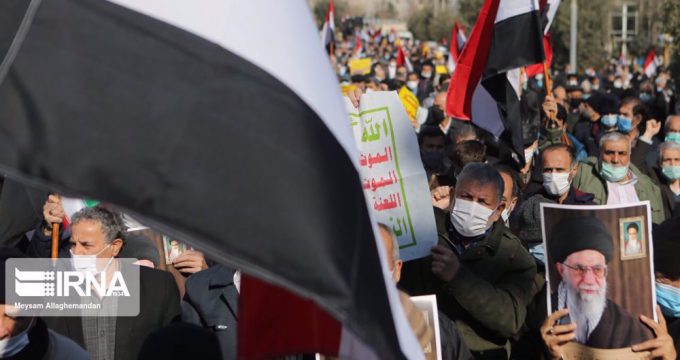 Iranians have taken to the streets in the capital, Tehran, and many other cities to express their support for the oppressed Yemeni people, urging the international community to take swift action to end the crimes being committed by the Saudi-led coalition of aggressors against them.

The protesters held rallies after the Friday prayers to strongly condemn the recent escalation the Saudi-led coalition’s airstrikes on Yemen.

They expressed their anger over the massacre of Yemeni people during the past seven years of war and chanted slogans against Saudi Arabia and the major sponsors of its deadly military campaign, including the US, Britain, and Israel.

They also slammed the silence of the international community and the so-called advocates of human rights in the face of the ongoing crimes in Yemen, saying the humanitarian crisis in the impoverished country must be stopped immediately.

A day earlier, hundreds of Iranian students rallied outside the United Nations office in Tehran to protest against the ongoing Saudi aggression against Yemen.

The developments come on the heels of more than 50 airstrikes by Saudi warplanes against various districts in war-torn Yemen in just 24 hours, which killed more than 90 civilians.

Enjoying complete arms, logistical, and political backing from the United States, Saudi Arabia led many of its allies, chief among them the UAE, in a 2015-present invasion of Yemen. The war has been seeking to crush the popular Ansarullah resistance movement and reinstall the former Riyadh-friendly government.

The war has killed hundreds of thousands of Yemenis and turned the entirety of Yemen into the scene of the world’s worst humanitarian crisis.

However, the Ansarullah movement, which runs the National Salvation Government in Sana’a, has vowed not to lay down its arms until the country’s complete liberation from the scourge of the Saudi invasion.

According to Yemeni officials, since the beginning of January, attacks by the Saudi-led coalition waging war on Yemen have claimed the lives of at least 150 people.

In response, the Yemeni army has conducted fresh rounds of retaliatory operations against Saudi Arabia and the UAE.

The administration of US President Joe Biden has fully supported Saudi Arabia’s war on Yemen, despite Biden’s promise to end US support for Riyadh.