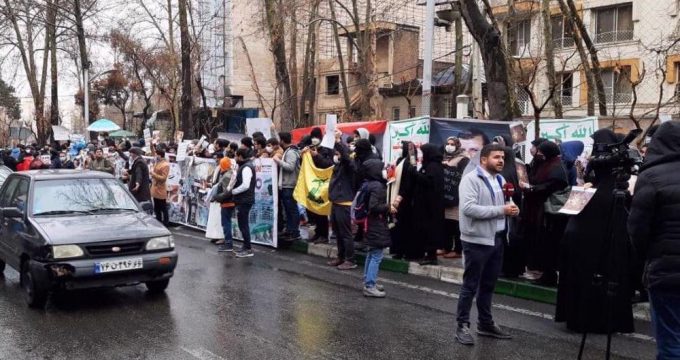 Hundreds of Iranian students have rallied outside the UN office in Tehran to protest against Saudi aggression of Yemen, after the Arab kingdom carried out dozens of brutal airstrikes against the war-torn country in past days.

The protesters took to the streets on Thursday, chanting slogans against Riyadh and its allies for their brutal acts against Yemeni people.

The protesters, which included students from the University of Tehran and Yemeni students living in Iran, condemned the international community’s silence on the Saudi aggression.

The demonstrators held photos of injured or martyred Yemeni children and chanted slogans such as “Death to America”, “Death to Al Saud”, and “Death to Israel” to express their disgust with the Saudi atrocities in Yemen.

The development comes on the heels of more than 50 airstrikes by Saudi warplanes against various districts in war-torn Yemen in just 24 hours, which killed more than 90 civilians.

The overnight attack created horrific scenes, with bombed-out buildings littered with bodies and hospitals overwhelmed. Yemeni officials have called for an international investigation into the airstrikes.

In 2015, Saudi Arabia led many of its allies, chief among them the United Arab Emirates, in launching an onslaught against its southern neighbor with the aim of restoring a friendly regime toppled in a popular uprising. Enjoying complete arms, logistical, and political backing from the United States, the coalition has maintained the brutal attacks since then.

The conflict and the siege have led to catastrophic consequences for the Yemenis, killing tens of thousands and displacing millions more. According to the United Nations, Yemen is experiencing the worst humanitarian crisis in the world.

However, the Yemeni forces that feature the country’s army and its allied fighters from the Popular Committees have vowed not to lay down their arms until the country’s complete liberation from the scourge of the Saudi invasion.

Most recently, the joint forces carried out two retaliatory operations condemned the “Yemen Storm 1” and “Yemen Storm 2,” which saw them striking targets deep inside Dubai and Abu Dhabi over the past week.