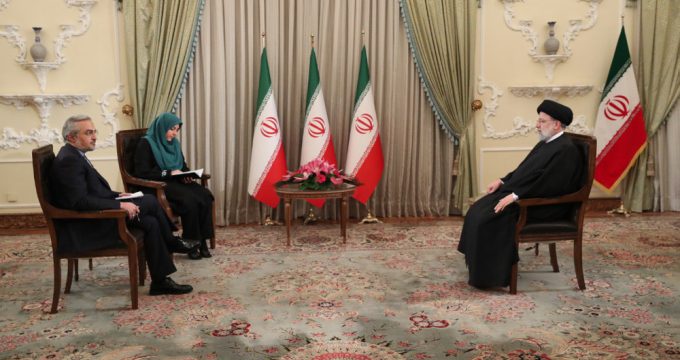 President Ebrahim Raeisi says it will be possible to revive the 2015 agreement if the United States removes its oppressive sanctions against Iran.

“If the parties are ready to lift the oppressive sanctions against the Iranian people, there is room for any agreement,” the president said during a live television interview on Tuesday.

Iran and the other parties to a 2015 agreement are negotiating in Vienna, Austria, with the aim of getting the United States to remove the sanctions and return to compliance with the deal.

The Islamic Republic, however, is not directly negotiating with the United States since Washington unilaterally left the accord in 2018 and returned the sanctions that the deal had lifted.

President Raeisi reiterated that the removal of the sanctions could lead to the agreement’s revival. “If the other party removes the sanctions, there will be a possibility to revive the pact.”

‘Not everything rests on negotiations’

Besides trying to have the sanctions removed, the government is also trying to “neutralize the sanctions,” he said, adding that proper economic relations with the neighbors constitute one way of negating the bans.

The president said his administration was determined to enhance Iran’s economic and commercial relations with foreign countries, which he said were not as advanced as its political ties.

“We should establish some [form of] balance in the country’s foreign relations,” Raeisi noted.

For instance, the president said, the country could unlock a massive economic and trade capacity in its relations with its 15-strong neighbors.

He said his recent trip to Tajikistan was followed by a triple increase in the volume of the bilateral business relations.

Raeisi said his trips to Turkmenistan and Azerbaijan also led to positive developments in the Islamic Republic’s economic relations with the ex-Soviet republics.

By the same token, the roughly-$3-billion volume of economic relations with Russia could be enhanced to as much as $10 billion, he said.

President Raeisi also noted that his recent three-hour-long meeting with his Russian counterpart Vladimir Putin in Moscow had featured agreement between the two sides on “the need for breaking the dollar’s dominance on the countries’ monetary and financial interactions.”

“I and Mr. Putin were in agreement that a lot of commercial transactions between the two sides could be done using [each side’s] national currency,” Raeisi noted.