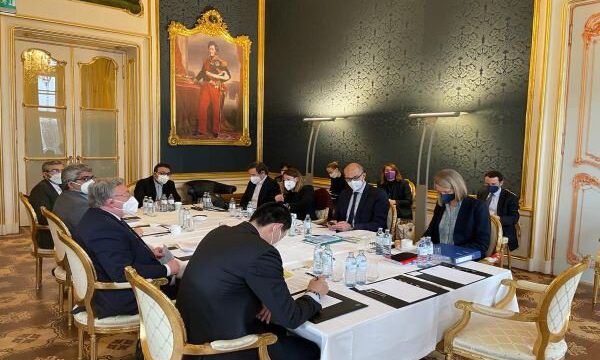 Vienna talks at risk of impasse due to US intransigence

Talks in Vienna between Iran and the P4+1 group of countries have come up against new challenges due to the United States’ refusal to budge on one of the key issues on the table.

Ever since the negotiators returned to Vienna about three weeks ago, negotiations have been proceeding at various paces, sometimes making steady progress whereas other times running up against difficulties.

And the difficulties have largely been due to the US stonewalling on several key issues deemed crucial for reviving the 2015 nuclear deal, known as the Joint Comprehensive Plan of Action (JCPOA).

One such issue is the verification process Iran has been demanding over the course of the Vienna talks given the US track record in reneging on its commitments. The US, however, refused such a process.

It seems the US has believed that Washington will by no means accept Iran’s demand to verify the economic effects of the lifting of US sanctions.

Washington will by no means accept Iran’s demand to verify the economic effects of the lifting of US sanctions.

The issue of verification, along with the guarantees Iran demands, has been a major point of contention in the eighth round of the talks. While Iran remains focused on getting a verifiable sanctions relief, the US has said that it considers the verification as a red line that it can’t cross, the sources said.

In addition to verification and guarantees, the negotiators are grappling with two other issues: Iran’s nuclear measures that should be rolled back after reaching a deal and the sanctions the US should lift as part of that deal.

The talks have made progress in the nuclear and sanctions spheres. But the US is currently putting the whole negotiations at risk of collapse. It refused to acknowledge that the talks have made progress, according to the sources. And its stonewalling in regard to verification and guarantees has slowed down the pace at which the talks are proceeding, with observers warning of an imminent impasse if the US negotiating team continued to stonewall.

Iran has insisted that it needs to verify any lifting of US sanctions because it does not trust the US in terms of giving sanctions relief.

Iranian Foreign Ministry spokesman Saeed Khatibzadeh somehow confirmed that the US has not budged on verification. He said one reason why the Vienna talks are proceeding at a slow pace is the US unpreparedness in terms of constructively addressing Iran’s proposals on verification.

Responding to a question posed by the Tehran Times at his weekly press conference on Monday, Khatibzadeh said, “One of the reasons why some talks in Vienna are proceeding slowly is the unpreparedness of the US toward some of our practical proposals.”

He said there was more progress on verification than on guarantees and some ideas are under consideration in this regard.

“In some spheres including verification, there are very important issues that remain unresolved,” Khatibzadeh said.

The spokesman said these issues require political decisions in Washington, and Iran is waiting for the US to make such decisions.

This kind of decision seems to be the major hurdle in the way of making a deal in the current round. The Russian envoy to the talks, Mikhail Ulyanov, said on Monday that negotiators from Iran and the P4+1 drafted “an important part of an outcome document” but “some outstanding issues still remain in the relevant segment of an outcome document.”

Whether the negotiators would succeed in bridging the remaining gaps remains to be seen. But Iran has attached high importance to verification and guarantees. And it’s unlikely to sign a deal that is not lasting and durable. For Iran, one option to ensure a deal will outlast the Biden administration is for the US to provide robust guarantees that sanctions won’t be reimposed again once Joe Biden leaves the White House.

The Biden administration, however, said it is not in a position to provide legal guarantees because it views the JCPOA as a political understanding, not a legally-binding treaty. As such, it reportedly offered political measures such as assuring foreign firms that the JCPOA would be honored as long as Biden is in the White House. Needless to say, these measures would stop short of meeting Iran’s demands.