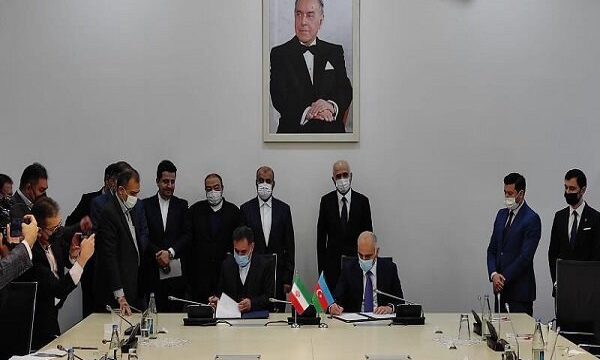 Iran and Azerbaijan have signed a deal to construct the joint Astarachai border bridge on the shared border to develop bilateral tranist.

On the second day of the visit of Rostam Ghasemi, Iran’s Minister of Roads and Urban Development and his accompanying delegation to the Republic of Azerbaijan, an agreement on the construction of a large bridge over the Astarachay River on the shared border between the two countries was signed on Tuesday in Baku.

Kheirullah Khademi and Rahman Hummatov, the deputy road and transportation ministers of Iran and Azerbaijan signed the memorandum of understanding in presence of the First Deputy Prime Minister of Azerbaijan Shahin Mustafayev and Rostam Ghasemi.

The Iranian delegation visited the newly liberated areas in Karabakh on Monday.

Meanwhile, the director-general for the company of construction and development of transportation infrastructures in the north of Iran Hassan Kalhori said that the Astara-Astara border bridge will be built as per a previously signed agreement between Iran and Azerbaijan.

Vehicles can travel on the bridge that will be built over the Astrachai river on the shared border between two countries.

“The construction of this bridge was agreed by the two sides a couple of years ago,”, the Iranian economic official said, adding that the bridge “will develop the transportation and tourism industries of the two countries.”

“The expansion and facilitation of transit between Iran and Azerbaijan is the other purpose of constructing the bridge that will be constructed in parallel with the joint railway bridge between the two countries,” Kalhori added.

As regards the technical features of the Astarachay Bridge, he further said ” The length of the bridge is about 100 meters, its width is 31 meters and project is scheduled to take about 18 months.”