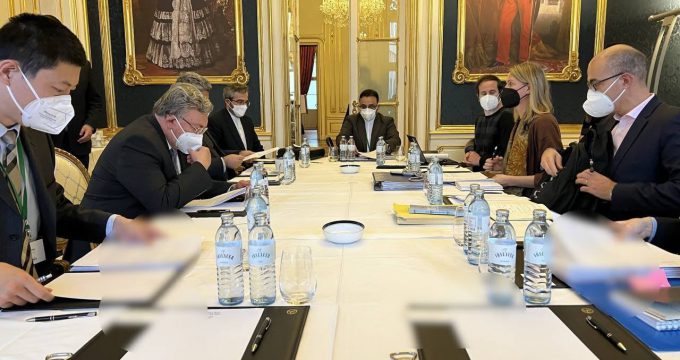 Iran, P4+1 representatives negotiate on removal of sanctions in Vienna

Iran’s top negotiator Ali Bagheri Kani and representatives of the P4+1 countries (Russia, China, the UK, and France plus Germany) in a meeting in Vienna on Sunday continued their talks on the removal of unlawful sanctions as the eighth round of talks are underway in the Austrian capital city between Iran and the five world powers.

As part of the eighth round of talks underway in the Austrian capital city, the negotiations continued with the focus of verification of the sanctions removal and obtaining a guarantee from the JCPOA parties.

Bagheri Kani met with his counterparts from three European countries; namely France, Britain, and Germany, and the meetings are followed up within the framework of bilateral and multilateral formats.

Based on an agreement reached in the last JCPOA Joint Commission meeting, the talks in Vienna will mainly focus on removal of unlawful sanctions on Tehran.

Nearly most of the negotiating parties believe that the talks are on the right track and are making progress.

While nearly one month has passed since the beginning of the 8th round of Vienna negotiations aimed at terminating the US sanctions on Iran, the talks are being pursued at various levels and the negotiating teams have removed many of the disagreements, better known as open parentheses.