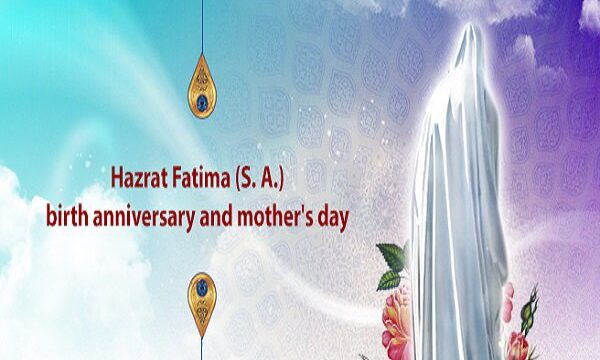 Every year, Iranians commemorate Mother’s Day on the 20th day of the lunar Islamic month of Jamadi al-Thani, which marks the birthday anniversary of Hazrat Fatima, the daughter of the Prophet of Islam (PBUH).

Hazrat Fatima (PBUH) commonly known as Fāṭimah al-Zahrā (d. 11/632) was the daughter of Prophet Muhammad (PBUH) and Lady Khadija (PBUH) and the wife of Imam Ali (PBUH). She is one of the Fourteen Infallibles in Twelver Shia belief.

Every year, people in Iran commemorate the national Women’s Day and Mother’s Day on the 20th day of the lunar Islamic month of Jamadi al-Thani, which marks the birthday anniversary of Hazrat Fatima Zahra.

Hazrat Fatima was the wife of Imam Ali (PBUH), the first Imam of Shia Muslims, and is referred to as a role model for all Muslim women.

Many Iranians take the occasion of this holiday to thank and honor their mothers, grandmothers, wives, and sisters and to spend more time with them. They pay tribute to them by giving them gifts.

In Arabic the word ‘Fatima’ means separated. She is named Fatima because her followers are separated from Hell because of her character. Zahra means ‘shining, bright, and brilliant’. The sixth Imam of Shia, Imam Sadiq (PBUH), said: “When our mother Fatima Zahra prayed, she shined for the heavens as the stars shine for people on earth”.

The opinion of the Shia school of thought is that Fatima possesses the status of infallibility. According to this verse of the Holy Qur’an, God willed that the Ahl al-Bayt (PBUH) be cleansed from all sorts of filth and uncleanliness and according to many traditions from both schools of thought, Fatima (PBUH) is one of the referents of this verse.

After the demise of the Prophet (PBUH), Fatima was injured when an armed group of zealots, at the order of the first caliph, Abu Bakr, stormed her house. As a result of suffering from both emotional and physical wounds that had debilitated her body, she was advised to rest at home.

However, after a short time, she passed away on the Jumada II 3, 11/August 26, 632 in Medina. The body of the Prophet’s (PBUH) daughter was, as she had requested, buried at night and in private. Since then, the location of her grave has not been revealed.